Swedish jazz from another world 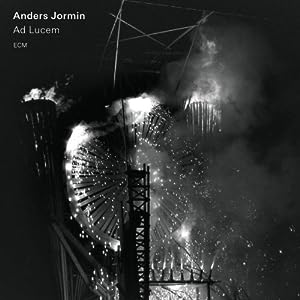 If someone were to ask me what my first impression was of the new Anders Jormin disc Ad Lucem, I probably would have called it "Swedish jazz from another world." Upon further listening however, I realized that what I was hearing were actually ancient (and beautiful) Latin texts, accompanied by some highly inventive music.

Anders Jormin is a master of the double-bass, and on Ad Lucem he is joined by Frederick Ljungkvist (clarinet, bass clarinet, tenor saxophone), Jon Falt (drums), and the vocals of Mariam Wallentin and Erika Angell. Ad Lucem is his third recording as leader for the ECM label, and it is a fascinating collection. The twelve songs here cover a wide variety of styles, from slow to free, and even an a cappella track.

We are drawn into the intriguing mixture right from the start with "Hic et nunc." The Latin-texts are quietly intoned as the piece begins, with the vocals of Mariam and Erika accompanied only by the understated drum accompaniment of Jon. This gentle mood is conveyed for the first four minutes, only to be broken by a marvelous double-bass solo from Anders. This is followed by an equally impressive bass clarinet solo from Frederik. The overall effect is captivating, and serves as an excellent way to introduce every member of the group right from the top.

When discussing his choice of Latin for the language utilized on Ad Lucem, Anders says that it "carries an almost magic ability to embrace and express whatever humanity has needed to communicate. The sense of eternity and mystery of this ancient language joined with the instantaneous presence and creativity of true improvisers became the inspiring framework in which the distinctive compositions came alive."

Indeed, the improvisational skills of Frederik Ljungkvist in particular are outstanding. His saxophone playing on "Clamor," "Caeruleus," and "Vigor" are especially noteworthy. The interplay between him and drummer Jon Falt on "Vigor" reminds me a bit of the nearly telepathic connection John Coltrane and Rashied Ali displayed on the classic Interstellar Space album.

In the end though, this is Anders Jormin's album, and his double-bass is always present. Ad Lucem was originally commissioned for the Swedish Jazz Celebration 2010. Following a wildly successful presentation there, he developed the concept into the full-blown disc just released. While the majority of the album's words are drawn from Latin texts, there are two exceptions. The first is "Vox Animae" which is in English, and the second is "Inter Semper et Nunquam," where he has set the poetry of Denmark's Pia Tafdrup to music. There is also some vocal improvisation from Mariam and Erika during "Clamor," and "Vigor."

The album closes with a 1:02 a cappela piece titled "Matutinum-Clausula," which brings the entire album full circle. Ad Lucem is adventurous, beautiful, and thoroughly compelling. The disc is recommended for fans who enjoy a little extra kick in their jazz, for Anders Jormin brings much more to the table than simply the standard fare.