Bob Margolin and Mike Sponza Band - Blues Around The World

The blues is a culture without borders and a universal language... 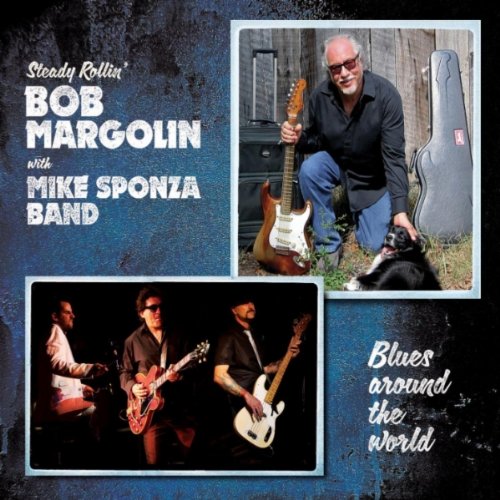 VH-1 had a hit show in the '90s that became an addiction for many of us called Behind The Music that profiled bands and artists, great and small. At some point it became a parody of itself because the stories behind so much of the music we love are pretty common: a hungry young band works its ass off for their big break, they get their big moment only to find out they've been screwed by an unscrupulous manager and/or record label, internal tensions often created by substance abuse tear the band apart, and years later they either come back bigger and better than ever or languish at state fairs as a nostalgia act.

Blues Around The World has a story behind the music and it's an important one: the blues is a culture without borders and a language spoken internationally. Veteran guitarist Bob Margolin had no idea he was about to record some of his favorite music of his career when he boarded a plane for a European tour in 2010 but through the omnipresence of the blues and -- of all things -- Facebook, Margolin wound up playing dates in Central Europe with Mike Sponza band. The universal language of the blues brought these men from different continents together as musicians and friends, which led to a two-day recording session in Slovenia that resulted in the album we have here.

I pledged in reviewing this record I would try to be the first person in recorded history not to refer to Margolin's time as part of Muddy Waters' band but I'm giving myself a pass on that for two reasons: 1) he mentions it in the first sentence of his liner notes and 2) his time spent playing as a member of a great ensemble band that included Waters and other icons like Pinetop Perkins and Willie "Big Eyes" Smith as well as Calvin "Fuzz" Jones, and a bevy of great harp aces comes into play on Blues Around The World.

Margolin opens the record with the kind of raw, gutbucket, wicked slide of Elmore James and J.B. Hutto made famous on "Lost Again" but what makes this record special is the chemistry between he and Sponza's band. The interplay feels so natural- extraordinary when you consider it had to be developed quickly on the road over the course of a handful of dates. Many times when skilled guitarists pair up, their interplay amounts to little more than spirited games of oneupmanship, each trying to outduel the other but  that's not what happens here. Their playing, mixed in stereo right and left, complements each other and serves the song. Rather Than Being Free," "Blues Lover," and "Hard Feelings" are three more great examples.

It's encouraging to hear real blues being played at a time like this when so many of the legends of the idiom have recently passed. The blues doesn't die and it doesn't have to evolve or change to keep up with current fads because it truly is an international language that binds and unites us. Forget "Hands Across America" and turn up Blues Around The World.