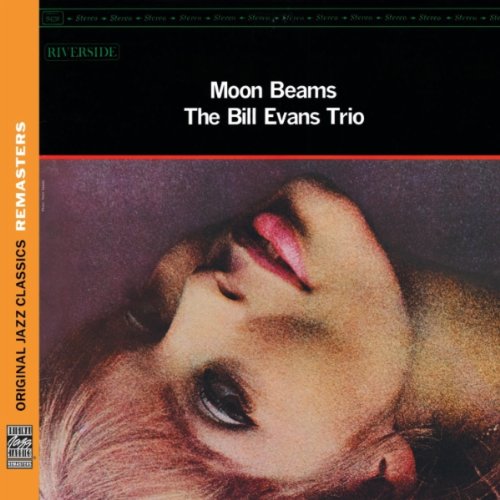 Most jazz afficionados would agree that the Bill Evans Trio of 1959-1961, which featured Evans (piano), Paul Motian (drums), and Scott LaFaro (bass.) was one of the finest in the music’s storied history. Their Waltz for Debbie (1961) is a cornerstone of Evans’ catalog, as is Sunday at the Village Vanguard. Both were recorded at the same Vanguard date, and show the remarkable empathy these three musicians shared. LaFaro’s death in an auto accident later that year was a huge loss, and affected Evans particularly hard. He took some time off, and Moonbeams represents the first post-LaFaro Trio recording.

As might be expected, the overall mood is somewhat somber, but there is an understated beauty that cannot be denied. For Moonbeams, Motian stayed with Evans, and bassist Chuck Israels was recruited. The album quietly pays tribute to LaFaro with the two Evans-penned tracks which open and close the eight-song set. The titles speak for themselves; “Re: Person I Knew,” and “Very Early.” The remaining six songs are standards from the likes of Rogers and Hammerstein, Jerome Kern, Sammy Cahn, and others.

The tone may be subdued, but the sounds of Bill Evans’ piano is never less than brilliant. The mood is set from the opening notes of “Re: Person I Knew.” As previously mentioned, it is pretty clear who the song is dedicated to. The rhythm section provides a nice background for Evans to pay tribute to his lost friend. The trio then tackle the standards that make up the majority of the album.

Among the more noteworthy selections included are “Polka Dots and Moonbeams,” “Stairway to the Stars,” “If You Could See Me Now,” and “In Love, In Vain.” Finally, we come to “Very Early.” It is another heartbreaking composition, especially when one knows the backstory. It is also, like the rest of the album, an incredible performance.

As part of the Original Jazz Classics series, Moonbeams has been meticulously remastered by Joe Tarantino. As a bonus, there are three previously unreleased takes included. These are alternate versions of “Polka Dots and Moonbeams,” “I Fall In Love Too Easily,” and “Very Early.”

Moonbeams is a wonderful set of music, with a very moving history. Beyond that, it stands as one of Bill Evans’ finest recordings, from what I consider his "golden era" of the late fifties - early sixties. For those who have not heard it before, this remastered edition is an excellent opportunity to check it out. While jazz has produced quite a number of amazing pianists, in my book nobody can touch the mastery of Bill Evans. Check out Moonbeams to see what I mean.