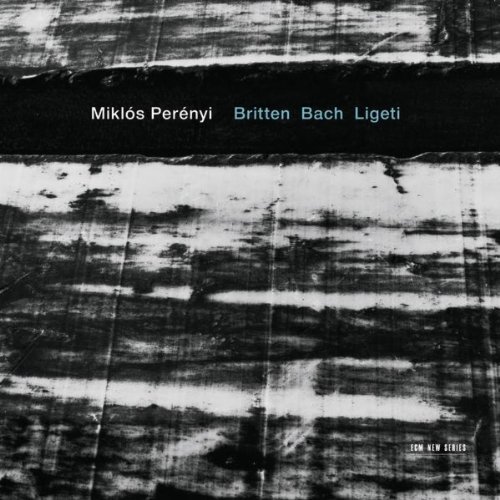 Hungarian cellist Miklos Perenyi studied at the Franz Lizst at the Academy of Music in Budapest, and has recorded with Andras Schiff, Denes Varjon, and the Franz Liszt Chamber Orchestra. He even studied with Pablo Casals in the mid-sixties. Perenyi’s first solo outing with the ECM label contains a fascinating mix of some of the finest cello suites ever written.

The composers and their compositions are as follows; Benjamin Britten: Third Cello Suite op. 87, Johann Sebastian Bach: Suite VI D-Major BWV 1012, and Gyorgy Ligeti: Sonata. In Perenyi’s hands, these three unrelated pieces work together to form a suite of their own. It is quite an achievement, and presents a musician performing at the peak of his considerable powers.

Miklos Perenyi’s love of the music of Benjamin Britten has been well-documented. On his collaboration with pianist Denes Varjon, titled Perenyi / Varion / Bach and Britten, the two recorded him back in 2010. On Britten / Bach / Ligeti, Perenyi presents Britten’s Third Cello Suite in its entirety. The full listing of the piece is opus 87, and was written in 1971.

Although Benjamin Britten’s Third Cello Suite could be considered the newest of the trio of compositions, it is quite traditional in sound. In fact the sound itself is one of the hallmarks of this entire album. All of it was recorded at the Auditorio Radiotelevision svizzera in Lugano. The acoustics are exceptional, are serve to further enhance the glorious sound and playing of this master musician.

The sixth cello suite of Johann Sebastian Bach (1685-1750) is the second performance in the program. As one of the most renowned and prolific composers of all time, Perenyi certainly had his choice of compositions. In all, Bach wrote six cello suites in total, this is (obviously) the final one. It is a gorgeous six-part piece, and one which some have called “profound.”

The choice Perenyi made in putting these two suites together was not accidental, in fact it was an almost organic process. Britten performed with Mstislav Rostropovich (1927-2007) for a period of time, and was moved to write his cello suites largely as a tribute of sorts to Rostropovich’s love of Bach’s suites. Since Rostropovich considered Britten’s Third  to be his finest achievement, Miklos Perenyi recorded it and Bach’s Suite VI side by side to emphasize the historical connections.

The final piece of this set was composed by fellow Hungarian cellist Gyorgy Ligeti (1923-2005). It represents a return home in a sense. Although it was written between the years 1948-1953, the work remained unpublished until 1979. This makes the “chronology” of the Sonata a bit confusing, but it is of little matter in the end. It ends this beautiful cello recital perfectly.

I found myself taken aback at just how brilliant the sound of Britten / Bach / Ligeti is. The acoustics of the hall certainly contribute to this, but the playing of Miklos Perenyi is a marvel as well. One of the greatest attributes I have noticed in classical music, and the ECM New Series specifically, are the many ways the “old” can be combined with the “new” to create juxtapositions that add entirely different dimensions to what had come before.

This is an album that works on a number of levels. There is the obvious appeal to fans of Miklos Perenyi, and the three composers he pays tribute to. There is also a very deep appreciation for the cello (technically the violoncello) as a solo instrument. Maybe more than anything else though, it is just the beauty of the music itself. This is a recording you do not have to think about in any way to thoroughly enjoy. The intellectual elements are there, as I have tried (in my limited way) to point out. But they are not at all necessary to fully engulf and appreciate Britten / Bach / Ligeti.

In the end, this is simply a masterful performance by one of the great musicians of our time.