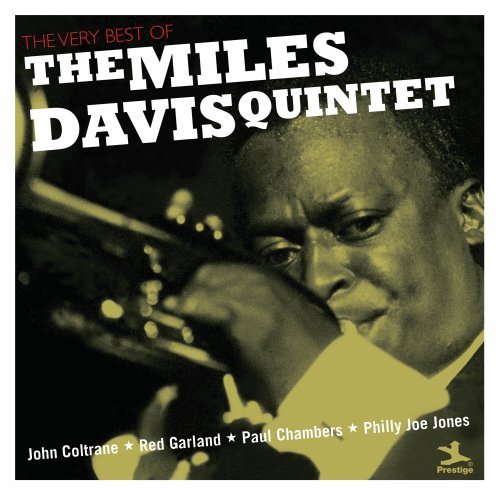 The new Very Best of series from Prestige Records offers an excellent opportunity to hear relatively early material from some of the most legendary figures in jazz. One of the first artists in this series is Miles Davis, who recorded for the label from 1951 to 1956. The Very Best of the Miles Davis Quintet is particularly interesting, as it features most of what would come be known as his first “great” band. The ten tracks on this single CD feature almost the full group who would record the legendary Kind of Blue in 1959.

Besides Miles, the quintet includes John Coltrane (sax), Paul Chambers (bass), Philly Joe Jones (drums), and Red Garland (piano). Besides the addition of Cannonball Adderly, the major change between the Prestige quintet and that of Kind of Blue was the swap of Red Garland for Bill Evans. It definitely signaled a major shift in direction, considering the contributions Evans made to Blue, but that is beside the point. Garland was certainly no slouch when it came to tickling the ivories, as is shown quite clearly here.

This compilation is certainly well-programmed. The disc opens with the Duke Ellington composition “Just Squeeze,” which is a very appropriate choice. There are many highlights here, including the Quintet’s deservedly famous rendition of Thelonious Monk’s “Round Midnight.” The set also includes a second Monk track, “Well, You Needn’t.”

“My Funny Valentine” is another highlight of Miles’ fifties oeuvre, and one he played live for years afterwards. This is the one cut of the ten that Coltrane sat out on however, for some reason. It is interesting to hear the Quintet cover a Dave Brubeck tune, “In Your Own Sweet Way.” Not only is it a fine piece of music, but on a professional level, only Brubeck’s Time Out ever really competed with Kind of Blue as the definitive Beat-era jazz album.

Sonny Rollins was doing some amazing work during this time as well. In fact, there is a Very Best of Sonny Rollins which will be reviewed here shortly. Miles pays tribute to him with a version of his “Oleo.” Of the ten tracks, there are but two Miles Davis originals, but both are very strong. As Ashley Kahn puts it in his liner notes, “In music schools and jazz programs to this day, “Four” and “Tune Up” are among the first numbers student improvisers are required to study and eventually tackle.”

This whole Very Best of series is great, but this Miles collection in particular is a must for those who have not previously heard the man’s pre-Kind of Blue music. Highly recommended.