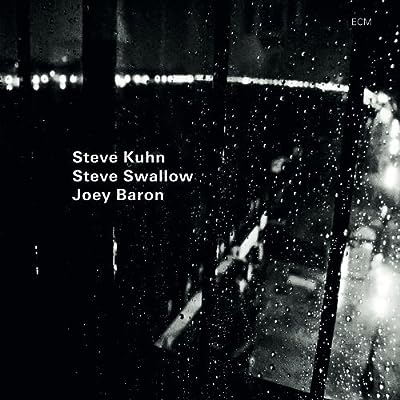 Pianist Steve Kuhn and bassist Steve Swallow first played the title track of the new ECM album Wisteria together back in the early 60’s. At the time, both were members of Art Farmer’s band, who wrote the tune. The two have played together a number of times in the intervening decades, and have a warm rapport. The third member of the Wisteria trio is drummer Joey Baron, who appeared on Kuhn’s 2009 Mostly Coltrane project. Wisteria represents the first recording of this trio, and it is a great example of three musicians playing at the top of their form.

Of the 11 tracks that make up Wisteria, six are Kuhn compositions. Four of these originally appeared on his 2004 ECM release Promises Kept. Besides “Promises Kept,” the songs revisited are “Adagio,” “Morning Dew,” and “Pastoral.” The Promises Kept album has been hailed as one of Kuhn’s finest, in part due to the orchestral nature of it, which worked very well. But a good song is a good song, a fact that is proven here with these stripped-down, trio versions.

The album opens with Kuhn’s “Chalet,” which provides a nice taste of things to come. Although all three of these musicians have been known to dabble in the more adventurous sides of jazz over the years, the melodies are front and center for this outing. In fact, that is the way it is throughout Wisteria. The record is almost (but not quite) a nod to the classic Prestige or Riverside albums of the late 50’s, which featured a selection of ballads interspersed with some roaring hard bop sessions.

One of the most notable ballads is “Wisteria” itself, which finds all three musicians playing at the top of their game. Another beauty is “Permanent Wave,” written by Kuhn’s longtime partner, Carla Bley. And the aptly titled “Romance” by Dori Caymmi is a wonderful piece, especially notable for the bass of Steve Swallow.

As good as all of these tracks are however, it is the hard bop that really caught my ears. Both of Swallow’s contributions, “Dark Glasses,“ and “Good Lookin’ Rookie,“ are great examples, as is Kuhn’s “A Likely Story.” Steve Swallow plays some of the most melodic bass this side of Jaco Pastorious. There were a number of times when I thought I was listening to a guitar solo from Wes Montgomery or Joe Pass. The sounds he makes by playing so fluidly in such a high register are remarkable. In his hands, the bass works as two instruments, both rhythm and lead.

For a trio so well-versed in the downtown avant-garde scene for so long, these three musicians have pulled off a unique feat. Wisteria is both accessible, and challenging, yet maintains a uniformity of excellence. It is an album that should speak to a wide variety of jazz fans.