Like The Rolling Stones, '72 was a watershed moment for The Dead on stage... 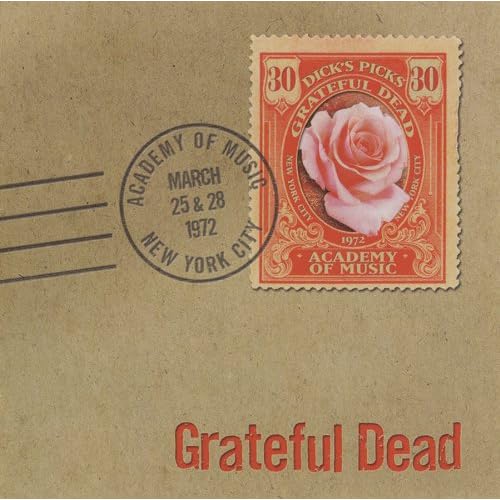 While I would probably never define myself as a true “Deadhead,” the more I hear of the Dick’s Picks sets, the closer I come to identifying as one. For those who are unfamiliar with this series, it was put together by a man who could have made a very valid case as being the “ultimate” Deadhead - the late Dick Vatala (1943-1999). With the group’s blessing, he combed their extensive concert archives to present concerts he felt were the best representatives of the band live. They were released directly through the Dead’s mail-order (and later on-line) business, and were met with nearly universal acclaim.

The Real Gone label has begun releasing these great concerts to retail outlets for the first time, and I must say, they are a revelation. More than any other band I can think of, the Dead’s true forte was always the stage, rather than the studio. There were exceptions of course, but it is hardly surprising that their breakthrough double-album was Live/Dead (1969). Their version of “Dark Star” on it certainly sold me, but the whole thing is a must.

The fact that the Grateful Dead as a band functioned as almost a living, breathing organism in and of itself is shown to a fascinating degree over the course of the Dick’s Picks series. They had been together for 30 years before Jerry Garcia’s (much too early) death in 1995 at the age of 53. When Dick’s Picks 30 was recorded at the New York Academy of Music during March 25 - 28, 1972, the band had added Keith and Donna Godchaux to the mix. Rod “Pigpen” McKernan was still with the group, and sadly, this tour would prove to be his final one with the band.

The official Warner Bros. Records document of the tour was Europe ‘72, a triple-album affair with a pretty goofy cover. It has generally received positive reviews from fans, but as this Dick’s Picks concert shows, their time in New York prior to heading “across the pond” was even better.

For one thing, there is the sheer weirdness factor of the first night. It was a benefit for the Hell’s Angels, (after fucking Altamont!) with Bo Diddley playing the first five songs with the band.

One of the things I really hate to see is how some critics have always dismissed the Grateful Dead as a group who lazily filled their concerts with endless, pointless jams. Listen to them backing Bo Diddley here. They were spot-on, and Garcia’s occasional guitar compliments to Diddley’s blues-based rock and roll are perfect. Those five songs, (including the nine-minute “Jam”), showed their adaptability to just about any environment.

The first disc does have its faults however. Their version of “How Sweet It Is (To Be Loved By You)” written by the Motown team of Holland-Dozier-Holland, and made famous by Marvin Gaye, should never have seen the light of day outside of the vaults. Donna Godchaux sings, and it is pretty awful.

Let’s face it though, disc one is basically a curio. The real deal is the over three-hour concert they performed on March 28, contained on discs two, three, and four. Dick Latvala went from his gut, and understood that this show had everything a Dead fan would want to hear. While the set-list is similar to that of Europe ‘72, it is superior in every way.

For one thing, there is the sequencing. I do not know if the label sequenced the tracks to fit the confines of the LP configuration, or if Europe ‘72 was presented exactly as the group played the set. What I do know is that by opening the New York concert with their (then) recent “hit” “Truckin“ they immediately drew in the notoriously jaded NYC crowd right away. On Europe ‘72, “Truckin” opens side five, which is a long way into the show.

The tune is a road song, and even though most of us have never been in a band trying to get to the next gig, a lot of us have been on long road trips before. So we can somewhat relate to the sentiments. Then there is the arrangement, which is very sparse, and, inviting. My point is that the Grateful Dead did not immediately immerse their audience into a maelstrom of the lysergic experience. That comes later, during “The Other One.” But they were smart enough to offer up a good-old, down-home tune to draw the crowd in in the first place.

It is kind of like what John Coltrane did with the song “My Favorite Things.” It was the popular theme to Mary Poppins, and when he initially presented it on the My Favorite Things album, he played it (fairly) straight. By the time of his Concert in Japan in 1967, the piece had developed into an hour-long extravaganza that virtually defined “free jazz.” Hell, the opening of that version is a 14:00 bass solo!

Anyone who tries to say that the San Francisco bands (and the Grateful Dead in particular) were not listening to Coltrane is nuts. Like a lot of “psychedelic warriors,” though, by 1972, the Dead had grown tired of trying to replicate the drug experience onstage. Nobody was interested in remaking Anthem of the Sun or Aoxomoxoa in a live element. Classics from those albums do appear here though. In fact, the previously mentioned 28-minute version of “The Other One” is transcendent. But by this point, The Grateful Dead knew that was only one element of who they were as a band.

While listening to this three-hour concert, one realizes what a short shrift they got from their contemporary critics. Their sets were well thought out. In fact, the show plays out almost as a three-act movie. There is a definite beginning, middle, and end. I actually find it really offensive the way this group has been portrayed over the years. While I cannot quote chapter and verse, I remember a well-respected critic (possibly Dave Marsh), in the early '80s, saying that the Grateful Dead served up nothing but nostalgia for the halcyon Summer of Love. The pseudo-pretentious point he had was that the Grateful Dead’s concerts were as relevant as those of the Mike Love-led Beach Boys. It sounded good, and he was never called out on it. But the premise was completely wrong.

Hearing music of this caliber dismissed so cavalierly pisses me off. Ok, I’m whining, and I may be more of a Deadhead than I thought I was. In any case, this NYC set from 1972 is fantastic. Another highlight absent from Europe '72 is the amazing gear-switch the group make from a faithful version of Marty Robbins’ “El Paso,“ right into “China Cat Sunflower.“

Take it from someone who was always sort of on the fence about the Grateful Dead. These Dick’s Picks are the cream of the crop. Don’t let the “accepted” wisdom of the Grateful Dead as a group who were more about a subculture than the actual music sway you. It’s bullshit. This was a group of extremely talented musicians, as this four-CD set proves over and over again.