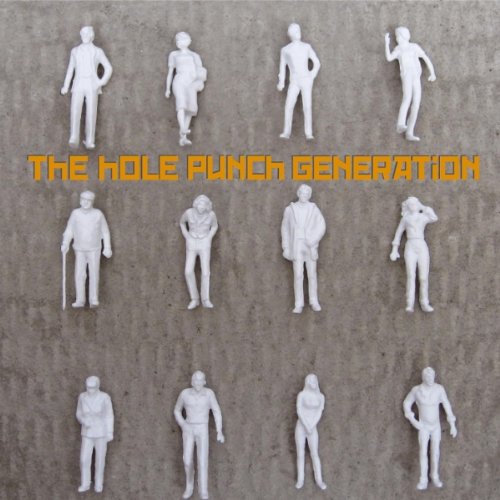 The Sheffield-based Audiobulb label are known for being the home of “exploratory electronic music,“ including a wide variety of electroacoustic artists. The trio who call themselves The Hole Punch Generation’s music is more in line with the world of three-minute radio-ready songs. Consequently, The Hole Punch Generation’s self-titled album represents a departure of sorts for the label. But never let it be said that Audiobulb’s David Newman does not have a good ear, for this set contains some great tunes.

The record is certainly programmed well, for one of the finest tracks on it was chosen as the opener. “Don’t Go” is a very sweet piece of music, with bittersweet lyrics set to an atmospheric background. My first emotion upon hearing it was regret, for it sounds like the hit single of my dreams - if radio were still interested in playing good songs. There were quite a number of similar moments for me. A few other cuts that immediately stood out were “Run,” “Masquerades,” and “Strap Up.” Each of these would sound very nice on my fantasy radio station as well.

For a label as eclectic as Audiobulb, one would expect the band to indulge in a bit more experimental fare also. And they do. There was a brilliant two-disc set released back in 1993 on the Silent Records label titled 50 Years of Sunshine, which celebrated the 50th anniversary of Dr. Hoffman’s discovery of LSD. One of the most impressive tracks on this various artists compilation was Closedown, whose “Bliss” was described as “Spiritual euphoria and transcendence now!” The perception works for me, and could easily apply to much of The Hole Punch Generation’s music as well.

I hear the spirit of “Bliss” in “They’re On To Me,” “Shallow,” and especially the closing track “Coyotes.” I have no idea whether the trio are even familiar with Closedown, so I hope I’m not insulting them by making the comparison. Be that as it may, these songs are some impressive examples of the versatility of this group.

It all comes together for me during “The Morning After.” The song is a bit more uptempo than much of the rest of the album, and the guitar is prominently featured. It seems to point to the next direction for The Hole Punch Generation, although for all I know it could be one of their earliest efforts. In any event, it is another wonderful song, on an album filled with them. Check out The Hole Punch Generation, and the many other artists on Audiobulb. There is some fine music being made out there, but one has to look further and further. This is one of them.