Simply one of the greatest jazz concerts of all time. 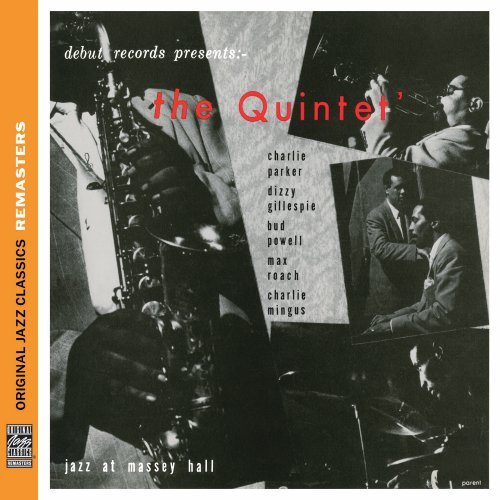 I came of musical age in the mid-seventies, during the time of Boston, Peter Frampton, and Foreigner. I worshipped at the altar of The Beatles and Stones as well, since we were already being force-fed the idea that Boomer classic rock was the only music that had ever really mattered. Still, I had to believe that there was more out there than what I was hearing on the radio. Thus began my ongoing quest for alternatives, which began with jazz. Weather Report and even Spyro Gyra were ok, but I knew that the real stuff was buried somewhere in the racks of my local Tower Records store. The only problem was finding it.

One day I stumbled upon an album called The Quintet - Jazz At Massey Hall. There were certainly some recognizable names on this one. The Quintet featured Charlie Parker (alto sax), Dizzy Gillespie (trumpet), Bud Powell (piano), Charles Mingus (bass), and Max Roach (drums). As it turned out, I had happened across one of the most legendary performances in jazz history. It was quite a find, representing a recording of a once in a lifetime gig between these musical legends, which took place on May 15, 1953.

I would be lying if I didn’t admit that the music at first sounded a bit “old fashioned” to me. Thanks to some experience playing clarinet and guitar though, I was able to get past that superficial dismissal, and to listen to what those guys were laying down. It was a revelation, and marked a permanent turning point in my appreciation of music. That is one reason I treasure this album so much. The other is much more basic. The six songs that make up the record are amazing. What is even more impressive is the fact that these guys had played in various configurations together previously, but never in this quintet format. It is basically the ultimate jam-session, featuring five musicians at the peak of their powers.

The new liner notes accompanying this Original Jazz Classic remastered edition shed some light on just how improbable the circumstances leading up to this performance actually were. Writer Ashley Kahn details the fact that Bird (Charlie Parker) showed up without his horn, and had to borrow one. He also mentions that if it had not been for the foresight of Mingus (who filled in for first-pick Oscar Pettiford), the show would never have been recorded, and lost forever to the annals of time. Just the thought of Charles Mingus being the “rookie” of the group gives one pause, considering the amazing contributions he made to the music over his long career.

It may sound like of bit of a cop-out, but to be honest, to choose a highlight of the six songs here is kind of futile, as the whole set is nearly perfect. There is so much going on during this concert that there is actually an entire book devoted to it, (Geoffrey Haydon’s Quintet of the Year). The show is also referenced in biographies of three of the concert’s stars; Parker, Gillespie, and Roach.

I am well aware that a lot of latter-day jazz fans begin their “studies” with Miles Davis’ brilliant Kind of Blue. And it is not a bad starting point by any means, but Jazz At Massey Hall should not be overlooked. It represents some of the finest bebop ever recorded, and ironically enough, something of an end of an era. Hard bop was taking over, with an even stronger emphasis on soloists, and the experiments of Miles, Brubeck and others were just around the corner as well.

Nearly 60 years on, Jazz At Massy Hall remains one of the definitive performances in the music’s storied history. For anyone who has ever wondered what truly brilliant playing (without a net as it were), this is it. Under any criteria one could use, Jazz At Massey Hall is a stunning achievement.