Corritore And Tail Dragger: 'Longtime Friends In The Blues'

Tail Dragger is as fiery as ever and you know he's got a helluva band... 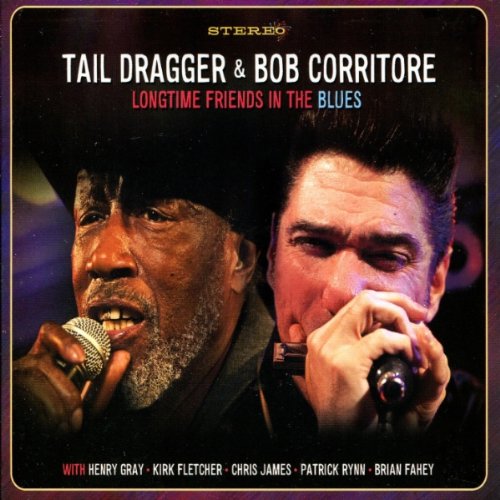 Stephen King has a short story called "I've Been To Rock & Roll Heaven (And You Know They've Got a Helluva Band)." It's a fun story and one of the first things I thought about when I held Longtime Friends In The Blues in my hands.

Take the unmistakable, inimitable voice of Tail Dragger and pair him with one of the blue's premier harp stylists in Bob Corritore and then assemble a crack bank like Chris James and Kirk Fletcher on guitar, Patrick Rynn on bass, Brian Fahey on drums, and the great Henry Gray on piano and vocal for a few cuts and ask yourself: is that any good? You bet your ass it is.

It got me to thinking just a little about the polarizing Howlin' Wolf London Sessions and how some young British rock royalty tried finding common ground with a hero they revered. The experiment didn't exactly fail nor did it really succeed. There seemed to be an earnest desire to do something special but the execution wasn't there and the spirit got lost in translation.

Nothing gets lost on Longtime Friends In The Blues because Corritore and the rest of the superb backing band have a deep, instinctive knowledge of how this music is supposed to be played and they execute that knowledge brilliantly throughout, allowing Tail Dragger to sing the only way he knows how and the music is rich and deep. It also helps nine of the disc's 10 songs are Tail Dragger originals (John Lee "Sonny Boy" Williamson's "Sugar Mama" rounds things out).

Dragger and Corritore are co-frontmen on this album with Corritore answering Dragger's vocals with harp fills and solos aplenty. It's an appealing recipe and the results are tasty as both are in top form throughout. Dragger's voice is as rough, sharp, and raw as ever. Corritore plays a lot but never overplays, fitting those phrases in the right spaces. A little more seasoning from the twin guitar aces James and Fletcher would've spiced things up but they're heard from, too. James gets to fire off a scorching solo on "So Ezee," part of what makes that track an album highlight. He and Fletcher sneak a few fills on "Done Got Old" and "Through With You," and their interplay throughout bonds with the rhythm foundation built by Rynn and Fahey.

There's only one Tail Dragger and he is well-served by a group of friends and musicians who know it, get it, and do it right, and listeners will reap those rewards over and over.