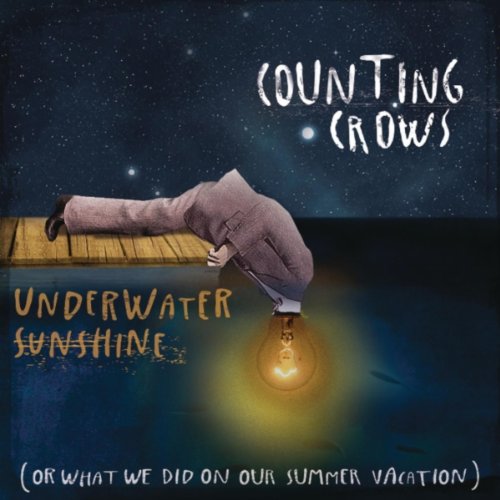 A few smug assholes dismissed Counting Crows as little more than "instant classic rock" when their landmark debut August & Everything After was released in 1993. It was lazy journalism and a pointless exercise by a few clowns trying to impress their peers with their clever putdowns and completely missed the point.

I can't imagine being a Counting Crows fan and not loving this record and I'd enthusiastically force a copy of Underwater Sunshine into the hands of friends who claim to dislike the band. It's magical to hear them take songs that aren't theirs and make them their own because these songs, no matter how new or old, have always existed in their language. These performances act as a missing link and fill in gaps you may not have even realized existed.

Tom Petty mused in "Big Weekend" on Highway Companion "the jokes in your language don't come out the same" and it's true that some things get lost in translation and covers albums can sometimes be a total bore or an outright disaster. I am smiling broadly and typing away furiously about this record as I listen to it and I can barely keep up with myself. We could blame it on the coffee but I suspect I'll be this hyper and smiley long after the caffeine buzz wears off because Underwater Sunshine (or what we did on our summer vacation) is both a collection of covers as well as a quintessential Counting Crows album.

I always liked Pure Prairie League's "Amie" but for some reason I never did check out any of their other songs. Counting Crows have bought me a little more time because now I can enjoy singing along (badly) to "Amie" without buying a PPL record (Duritz says in the liner notes I still need to and I'm putting it on my Amazon wishlist, so don't be bashful, friends). David Immerglück plays some great mandolin on this track and Duritz's vocal reminds me of everything I've ever loved about this song.

I was indifferent towards Scotish band Travis with the exception of a song or two but the version of "Coming Around" is blinding. Charley Gillingham and Immerglück make sonic magic with a bevy of standard and non-standard rock instruments and Duritz takes his vocals to a place I don't think I've ever heard him go.

I only stumbled onto The Byrds, Gram Parsons, and Sweetheart Of The Rodeo and they've now all become favorites of mine. "You Ain't Going Nowhere" is among my favorite Sweetheart songs and one of the great joys of my life was hearing Roger McGuinn perform it solo acoustic at Music City Roots in Nashville a couple years ago. Counting Crows absolutely kick the shit out of this fantastic Dylan-penned song. The opening guitar lick burns bright, Duritz's lead vocal and the harmonies are glories to behold, and Immerglück and Gillingham are again masterful on mandolin and piano respectively.

The "inner rock critic geek prick" doesn't want me to say this is my favorite version of "Nowhere" but he can fuck right off (that's right, I told myself to go fuck myself) because it might well be. Parsons' name crops up elsewhere on the album as his "Return Of The Grievous Angel" is another of the covers on this disc and it, too, is a highlight.

Listening to the record reminded me of something Bill Flanagan wrote in the liner notes of Across A Wire. Adam Duritz is a masterful lyricist who can be uncomfortably honest about the human condition; he could walk the troubadour's path as singer/songwriter and I'd still listen but I'm glad he chose to front and be part of a rock band- the kind of band that can make a record this fucking great.