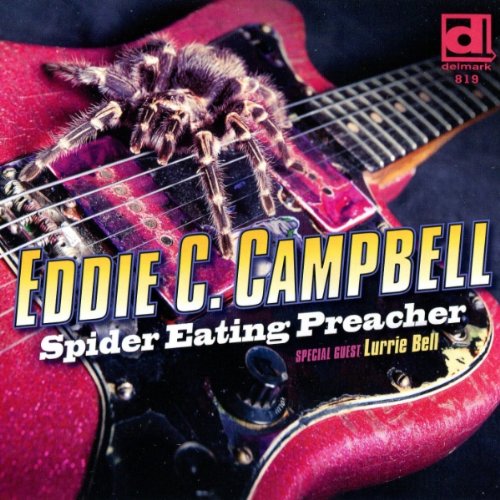 Thank goodness for bluesmen like Eddie C. Campbell.  That’s not to say there are many like Eddie.  Indeed, at a time when it seems the twelve-bar template has been all but exhausted, Campbell’s like a breath of fresh air.  He’s a bluesman through and through, yet within that relatively restricted format, his music is intensely idiosyncratic.  His songs are laced with sardonic humor and occasionally surreal imagery, yet he delivers them in a manner, as the old blues song says, “as serious as a heart attack.”

Spider Eating Preacher, Campbell’s intriguingly-titled latest, is a generous helping of wry bemusement at the world’s follies, with quirky lyrics and occasionally eccentric  arrangements.  Working with a huge cast of players (some ten supporting musicians are credited in total, though few are household names), he marshals forces masterfully to deliver a collection that ranks among his best.  Prominent among the players is Eddie’s real-life stepson, the great Lurrie Bell, who contributes guitar on a pair and vocals and harmonica on the acoustic closer, “Playing Around With These Blues,” a song that sounds as casual and relaxed as its title suggests.

That’s about as conventional as Eddie gets, though.  Take opener “I Do,” which starts with a perfectly normal, slinky beat.  But then a violin comes in – yup, a violin, adding harmonic fills while Eddie picks out some spacy notes on guitar.  The title song that follows features lyrics that seem plucked straight from a feverish dream, while “Call My Mama,” a standard enough title, features echoey, stuttery  vocals that give the tune a uniquely menacing vibe.  “Soup Bone” flirts with classic double-entendre metaphors but in the end seems to be as much about dinner as it is about sex, while “My Friend (For Jim O’Neal” is a deeply personal note of appreciation to the well-known blues journalist and scholar.  One of the disc’s highlights, “Starlight” is a mellow, jazzy guitar conversation between Campbell and Bell featuring stellar organ from Darryl Coutts.

There are a few more-or-less straightforward covers, though once again Eddie avoids the obvious – Mel London’s “Cut You A-Loose,” Jimmie Lee Robinson’s “All My Life,” and “Skin Tight,” originally from funksters The Ohio Players.  He puts his personal stamp on every tune, whether it’s that violin (returning again to provide rhythmic support on original “Downtown”), his stinging, reverb-rich guitar tone, or the somewhat strange background vocal (presumably Campbell’s own multi-tracked voice) on the last verse of “All My Life” that’s just plain out there.

Throughout it all, it’s Eddie’s razor-sharp and icy-clean west-side picking and sly, easy-going vocals that hold things together.  He may not sound quite like anyone else, but his musical vision is strong enough to handle the occasional weird moment, and in a world where even something as honest and true as the blues is starting to feel a bit pre-fabricated, Eddie reminds us that the blues is supposed to be just a bit dangerous, too.