Eric Bibb tells us in "Music" from his latest album Deeper In The Well genres and labels are meaningless to him, that it's all about the feeling. He's 100 percent right, of course, but to ignore the textures and sounds of the songs on this record is to miss out on its beauty. 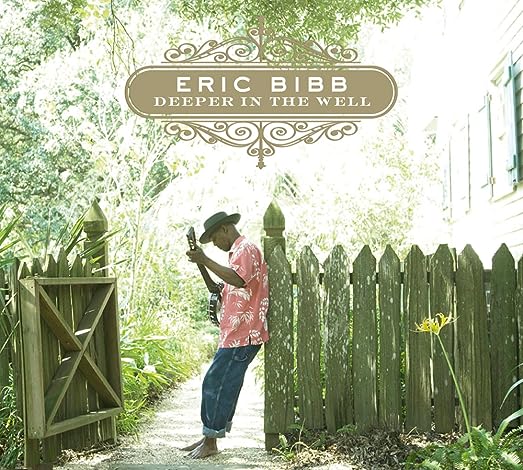 Bibb intricately and deftly blends folk, vintage hill country, Delta blues, Louisiana Cajun, traveling medicine show, and gentle swing throughout the 13-song disc. If that sounds ambitious, chaotic, noisy, or disjointed, you are in for a pleasant surprise as it is brilliantly executed. Musicologists will tell you all these idioms share common roots even though they originated in Africa, Ireland, France, the United States, and points across the globe. They share another common source on Deeper In The Well: the soul of Eric Bibb.

Great harmonies and some fabulous harp blowing by Grant Dermody bond with Bibb's rhythmic guitar and the understated percussion of drummer Danny DeVillier on the opening track, "Bayou Belle." Bibb's hypnotic spell is cast and the magnetism of the music never lets up and only gets stronger.

The simple, profound portrait of contentment in "Sittin' In A Hotel Room" is one of the most moving things I'll ever hear and is a contender to make the list of "The Last Song I Want To Hear Before I Die." He sketches simplicity and peace and makes poetry of both the music and the lyrics.

The aforementioned "Music" could have been written as a scathing indictment of radio segmentation and music industry bullshit or a not-so subtle jab at listeners who get caught up in making sure what they're listening to is "cool" or hip" before deciding whether or not what they're listening to is good. Bibb doesn't scold or castigate but instead revels in the joys of making and loving music, regardless of where it originated or what style its played in.

"No Further" stomps quietly but powerfully and "Movin' Up" is an empowerment anthem filled with folk wisdom and delivered in a gentle, folksy way.

B.B. King implored people to "Help The Poor" with his wonderful 1964 performance of the Charlie Singleton-penned record and Bibb makes an equally eloquent plea via Harrison Kennedy's "Could Be You, Could Be Me," a song reminding us that "there by the grace of God go I." It shouldn't matter yet it feels a little more poignant knowing the song was recorded in Louisiana where so many so suffered so (and still do) much in the aftermath of Hurricane Katrina.

Dylan's "The Times Are A-Changing," closes the record and I love the mixed metaphor of a song that prophesied change closing a record built on antiquated musical idioms. Bibb's delivery smooths the provocative, confrontational, combative tone of associated with Dylan's original, revealing the timeless truth in the lyrics of the song. He wrote and sang this with the backdrop of Vietnam and the civil rights movement in the '60s but the truth is the times are always changing from one generation to the next and that has always caused generational strife regardless of the era. Bibb sings as one who finds comfort or reassurance in the inevitable changing of the guard rather than a young man storming the gates and another dimension of Dylan's power of words and ideas is revealed.

The individual pieces are all interesting and worth time, consideration, and individual attention but the real achievement and beauty of Deeper In The Well is if keep digging deeper, you'll always find another cool drink of water. Eric Bibb has made a timeless record to be treasured forever, a well that will never run dry.