Vinyl Lust In the Digital Age 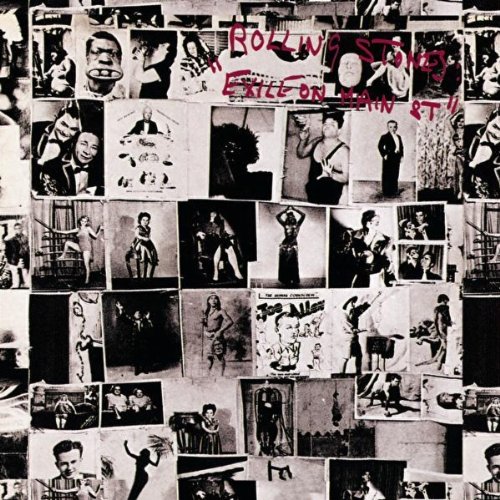 With nothing to do on a Sunday in the New York snow, I usually find myself at Barnes and Nobles on 86th and Lex, just to browse. Every time I go into the music department there is a big box that keeps calling my name – the Deluxe Edition of The Rolling Stones’ Exile On Main Street. I can’t recall how many times I have looked at the big, heavy box with the cover I have known for nearly 40 years but now holds many goodies for a rabid baby-boomer who used the record as the soundtrack for a life. No amount of hinting to family and friends brought it to me for Christmas – the $139 price tag is not very enticing to anyone except the most obsessive fans.

I am writing from the sitting area looking out on the courtyard garden of New York’s Museum of Modern Art where a few months ago The Rolling Stones (or rather Keith, Mick , a reclusive Charlie and a noticeably absent Ron Wood) celebrated the long-awaited, remastered, and expanded release of what is often called, and probably is, their best album, Exile On Main Street.  No, I wasn’t invited to the soire even (though I have a few “ins” with the band and their many handlers). I don’t think I would have felt too comfortable celebrating one of the grungiest, sweatiest, rawest collection of songs in music history with the beautiful people of Soho and the Upper East Side. The TV-news clips on the local stations said it all: Mick, dressed to the nines like the fashion plate he is and Keith, well, Keith looked unnaturally sober. Charlie was not in reach of the sound-bite cameras. I can imagine his darting out of the place with Keith in tow and into the first limo to CT as soon as the press photos were taken. I don’t think I missed anything, especially when I compare it with my own little patches of Exile which bookended the Scotty Moore & D. J. Fontana’s sessions for All the King’s Men, circa 1996. More on those magic moments later – I wanted to write about Exile On Main Street – and I will.

With the sixties suitably put to rest by The Stones at Altamont, the newly-crowned “greatest band in the world” who treated us to Get Yer Ya Ya’s Out for a live souvenir followed it closely with Sticky Fingers. Both LPs helped convince a world still mourning the loss of the Beatles feel like there was something to live for. The first couple of years of the new decade were the early middle-age of rock and roll when it didn’t know which direction to push forward – the glam-rock of T Rex, Mott the Hoople and the reigning queen of the stage, David Bowie, or the soft-rock coming from California in the wake of Gram Parsons’ transformation to a new sub-genre. With Exile On Main Street, the Stones gave us both and threw in some pretty damned authentic gospel and blues for good, no, great measure.

April 1972 gave glimpse of the album that would grace every “Best of “ and “Desert Island” list for all the years to come. FM “underground” radio was beginning to grow legs and even kids in Alabama could hear an entire album side uninterrupted - or more. I remember an obviously over-mellowed DJ play Pink Floyd’s Echoes all the way through and then say, “That sounded so good – I’m gonna play it again!” And he did. AM was still the pop-rock king but, thanks to WVOK AM/FM in Birmingham, we could hear and appreciate the Stones followed by Joe Tex, Marvin Gaye, and Badfinger. Nashville’s slick country was just about the only popular music that was off-limits. “Tumbling Dice” hit the airwaves in early April and every kid I knew started mowing lawns and saving allowances for the LP that was to follow a month or so later.

All the “hip” kids with guitars learned how to play the B side, “Sweet Black Angel,” even though the redneck press tried to make a controversy out of the Angela Davis/Black Panthers theme (it was a B-side, for Pete’s sake!). We played that song because it sounded cool in a different way from the Stones we knew and it was a helluva lot easier to figure out the chords and riff than the A-side’s perfect groove. Little did we know that at least half of the album would be required from every decent bar band for a long time. We also learned that we hadn’t saved up enough money for a double LP and a $10.98 list price.  Mowing a couple of extra lawns was well worth the effort for so much music – and most of it as good as or even better than the single. We were already used to The Byrds’ countrified rock and The Bands’ old time folk stories of a Dixie we never knew.  What we got with Exile was everything rolled up in one weird but intriguing package complete with postcards of the band dressed as gangsters and the first song-by-song annotations we had ever seen. Mick played guitar! How cool was that?

As good as Exile On Main Street in its entirety was to the 15-year old me, I have the strongest memories of  “Tumbling Dice.”

From the day it hit the radio and dime store shelves, it was in heavy rotation on the juke boxes at the neighborhood pool, skating rink, and bowling alley all summer even after “Happy,” Keith’s first lead vocal on a single, came out in July. Though released in spring, “Tumbling Dice” is a song made for summer and sends me into a time-warp when I hear those opening guitar riffs. We bought the LP for repeated listens and cover-gazing at home, but it was the flea-market bootleg 8-track tapes that blasted from cheap speakers in every car circling the Dairy Queen. I still shudder to think how the first program-change came right smack in the middle of “Tumbling Dice!”  Even with the seconds of sound loss on those trash tapes, it was worth it to have it in easy access anytime we wanted to listen – and it still sounded great. Hell, it even sounded great when covered six years later by Linda “I hate rock and roll” Ronstadt.

While not quite a Luddite, I am always late embracing the new formats but in 1986 when Exile On Main Street was available on compact disc for the first time, I had to have it even though it would be several months before I purchased a CD player. Who knows, I was thinking, this could just be another planned obsolescence format. At least now I could listen to the entire record without having to flip the records, hear the click on the 8-Tracks, or turn the cassette over. By my recollection, I have worn through two sets of Exile on vinyl, two 8-Track tapes (one boot, one real), at least two factory cassettes, and two CD versions. What is one more little purchase? Well, I have read that they are releasing the “new” version in a variety of configurations. I will choose one and hope for the deluxe for a birthday present (hint-hint to friends and family!).

I still have not heard any of the ten extra tracks but felt a little suspicious when I heard months ago that they were “tinkling” with the tracks. Both Mick and Keith have said they didn’t do much and it was kind of cool to hear that they asked Mick Taylor to come in and add a solo on one or two unfinished tracks. As any true Stones fan knows, there are many bootlegs (most really good) of outtakes, demos and rehearsals credited as being from the Exile sessions. The latest “batch” to hit the internet, I Gave You Diamonds, You Gave Me Disease, is exceptionally good and sound like they actually came from the 1969-72 period that would yield the first release. There are a few crossovers from the new release and the bootleg but a band that has been around so long and has such a staggering number of good and great, but not officially-released, tracks in the can, a Dylan-style “Bootleg Series” would be worth mowing a few extra lawns to own.

A couple of final trivia points – on the Disease bootleg, there is a great 53-second track called “Exile On Main Street Blues” that would be wonderful to hear in its entirety if one exists. And for all of you who miss playing a record backwards to search for “satanic messages,” when I listened to my 1986, first-ever CD purchase, version beginning to end yesterday – the timing digits were 66:33…66and 6? Hmmmm…