BlindedBySound Music Television: U2 - "Hold Me, Thrill Me, Kiss Me, Kill Me"

The wait comes to an end; I can't wait to see Florence + The Machine and U2 in Nashville! 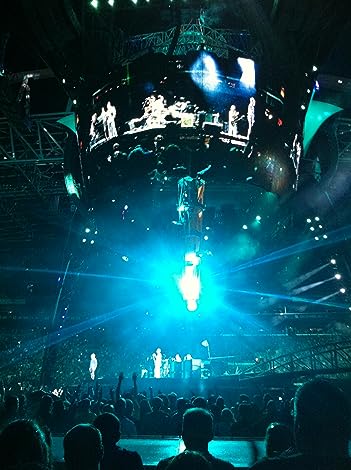 And then the moment arrives…

Is there anything better than the day of a show? Does anything beat the anticipation and excitement of the moments before the band hits the stage? The awe and wonder of it all?

In a few short hours, we will hit the road for Nashville to see U2 on the final leg of their recordbreaking 360 tour. I've seen the show once, as has fellow BBS writer Stephanie. She wasn't plussed by her experience. I expect my reaction will be different. I liked the show in Atlanta, even if I did get played out when they subbed "Until The End of The World" for the wondrous rarity "Your Blue Room."

I have a feeling Nashville will be different. They're still going to play the overrated, overplayed "Until," but it will be part of a celebration of the 20th anniversary of the landmark Achtung Baby and the extraordinary ZooTV tour. Many songs from that era have come back out on this 360 victory lap including "Zooropa" and another song that sat too long on the bench, "Hold Me, Thrill Me, Kiss Me, Kill Me."

U2 is famous for many things but guitar riffs aren't usually what come to mind. This might be the mightiest riff The Edge ever conjured and they've been playing it regularly. Woe unto them if they deny me this treat. This has been a favorite of mine for a long time and I never thought – like "Your Blue Room" – that I'd ever hear it. It would be a big fucking mistake for them to play me out twice. The video quality is better than the audio, but this is what I'm hoping to see. The desire to live this moment in person is the adrenaline that will propel me through the two-hour drive, shelter me from the crowds, and parking shenanigans, and cool me in 100 degree weather. This is the moment.

Is there anything better than the day of a show? Let's do this thing!