Rihanna's hold on the top spot on the Billboard Hot 100 didn't last all that long, despite her best efforts to garner attention by flighting solo on a transatlantic mission or whatever it is she was up to. Now, a gentle man named Bruno Mars and his song "Locked Out of Heaven" reign supreme. 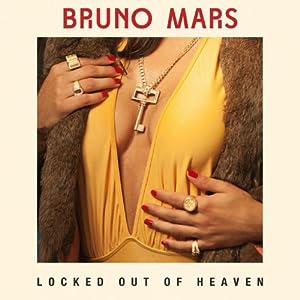 I knew less about Bruno Mars than any other Hit Parade subject heading into this particular endeavor. That includes Carly Rae Jepsen, but that's only because I got to her so long after the fact because how could the song of the summer go unremarked upon? I've heard his name, but I literally could tell you nothing about him. I do like his name, however. It reminds me of some sort of Raymond Chandler-esque character. An enforcer with broad shoulders but a glass jaw. I hope it is his real name. Additionally, the song title "Locked Out of Heaven" is kind of intriguing. Did he, perhaps, look for Heaven's hide-a-key?

The song starts out well, with a nice guitar lick. It has sort of a reggae tone. However, Maroon 5's horrendous "One More Night" sort of had that kind of start, before it began the process of destroying my soul. Mission accomplished, might I add. Fortunately, "Locked Out of Heaven" suffers no such dip. The vibe of the music remains similar, and has a sort of The Police feel to it. I could have seen this being a song for Sting and company back in the day.

Straight up, the music of this song is really enjoyable. I very much liked the way it sounds through and through. There are some bleep and bloops and siren type sounds that are, you know, alright. However, the more traditional musical instruments carry the way. There are some fun drum breaks, and the song has a nice flow to it. It doesn't get redundant, but it also doesn't overreach.

Mars' voice complements the music well also. He matches the tone and brings some emotion and skill to his singing. Aurally, it is quite pleasant, just like the music he is singing over. However, a lot of the time the lyrics didn't really stick out to me. Occasionally, I didn't even understand what he was saying. The only lyrics that really rise above the music is the chorus of, "You make me feel like, I'm locked out of Heaven." That's alright, I guess. I mean, I am assuming it's some sort of heartbreak or unrequited love song. He thinks being with some woman would be heavenly but he's not with her or whatever. Fair enough. At least Bruno Mars describes this feeling in a somewhat new, evocative way.

I don't know if I would say I think "Locked Out of Heaven" is a good song. It is, however, perfectly pleasant. I could listen to it again. If I heard it in a CVS or whatever I would not mind. It is also probably the best song I've heard in my Hit Parade writings. Admittedly, this is with only a cursory understanding of the lyrics. I presume if I heard it a few more times lyrics would start to stick out to me, and that could be good or bad. All I know is what I heard was pretty solid. The song SOUNDS really good. That, like knowing, is half the battle. If Bruno Mars gets another song atop the Billboard Hot 100, I might actually look to that with mild intrigue. That's practically a rave review based on previous entries in this series.