This week, the dance between Taylor Swift and Flo Rida continued, as Swift once again took the top spot in the Billboard Hot 100 with "We Are Never Ever Getting Back Together." So, I want to take the time to discuss the song of the summer. The song in question is "Call Me Maybe" by a plucky upstart named Carly Rae Jepsen. This is, evidently, at least a somewhat officially title, as I am fairly certain I saw somewhere that Billboard had deemed it the song of summer, given it's popularity over those months. This seems reasonable, as "Call Me Maybe" was the number one song from the week of June 23 to the week of August 18. Yep, that about covers summer. 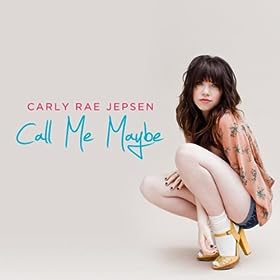 For some reason, the "song of the summer" is a particularly debated topic. Nobody ever cares about the song of the fall. Perhaps it relates to the fact that kids don't have school and lots of people go on vacation or spend time at the beach surfing and killing sea monsters with sodium. Maybe it's just an arbitrary decision. However, with summer coming to a close, what with people no longer allowed to wear white under penalty of death and what have you, it is time to look back to the song that launched an unknown woman into the stratosphere.

This song is going to be an usual subject for Hit Parade, because I have sort of heard this tune before. Not in the recorded radio version i.e. the truest version of the song in terms of what people are discussing. The version I heard was performed by Jepsen, Jimmy Fallon, and The Roots on a bunch of kitschy instruments. Nevertheless, it was quite joyous to behold, but it also means I've heard the lyrics and sort of the beat of the song. However, I have not heard the official song... until now.

All I knew heading into listening to "Call Me Maybe" was that Jepsen is evidently Canadian and has some sort of connection to Justin Bieber, which helped launch her into stardom. Obviously, getting a Bieber bump helps, but it couldn't be the sole reason the song became so popular, right? I mean, people had to really enjoy it and pass it along through the internets I assume. That being said, she could still be a one hit wonder. That's not to denigrate her, or this song. Sometimes forces conspire and things break right and one song reaches the stratosphere, but the artist is never heard of again. Sometimes you turn out to be Men Without Hats. Other facts worth noting: One, the official video on YouTube has also 250 million views. To which I say, "Holy shit." That's wild. Second, the background image on the page for the video is of Taylor Swift from her latest single. I just find this odd.

OK, as for the song, I might as well get this out of the way: The chorus is super catchy. The lyrics are, at best, tolerable, and have some logistical questions. The seem more apt for a teenaged artist, but from what I gather Jepsen is in her mid-20s. I bet this is a topic that's been covered before, namely, is it truly "crazy" for an adult woman to give her number to a guy she just met. I mean, presuming they've talked. If she is accosting strange men on the street and giving them her number, that's a bit weird, but whatever.

I mean, the song's content is simple and to the point. Jepsen sees a dude, finds him very attractive, and gives him her number. That's super basic, but that's fine. It's not inane or insulting or stupid. However, that's not the crux of this song. "Call Me Maybe" is a poppy banger of ruthless efficiency. When this song ended, I said "Oh wow, it's over already?" It went by in the most breezy way possible. A few fun choruses, some other stuff, and then it gets out of the way. That can be appreciated.

I don't like the parts she sings softly. The meter is sort of odd, and that's where I have the most lyrical issues. "Ripped jeans, skin was showing" is dumb. I also question why she is giving up pennies and dimes to the wishing well. What about nickels? Why does Jepsen cherish her nickels so dearly? I want answers! However, those portions of the song are a small part of this. It's mostly about the chorus which, as I previous mentioned, is super catchy and really enjoyable. The music is top notch poppery, and her vocals add to the joyful noise. Again, the lyrics don't really strike me as being terribly worthwhile, but the way she sings them sounds find. I particularly enjoy the mixed meter of "And all the other boys." Somehow, it works.

I get it. I'm down with Carly Rae Jepsen's "Call Me Maybe." I don't know how this woman ended up with this song. I don't know who produced it for her. I hope it was some Canadian folks that nobody has ever heard of. I hope it was the McKenzie brothers from SCTV. However, Jepsen was given a gift, and she made the most of it. She's a talented singer, or she has talented producer sweetening her vocals, and she brings plenty of energy to the party. Most importantly, the music is top notch. It is the height of pop music excellence. Is it that far removed from what you usually hear? Probably not. That's not relevant however. There's a lot of chocolate bars out there, but that doesn't mean some aren't better than others. I don't know why I went with chocolate, since I don't like it, but bear with me here.

A mystery woman from the Great White North released a song that made its way across the border and became a runaway sensation. I personally find it deserving of such success. "Call Me Maybe" is a good song. It seems ideal to have on in the background, where the lyrics can fade into the distance but the music keeps on keeping on. Summer is over. Carly Rae Jepsen's future is up in the air. "Call Me Maybe" will live on.