This latest phenomenon is mildly annoying...

Maroon 5's atrocious song "One More Night" remains atop the Billboard Hot 100 chart for the fourth week in a row. However, there is a song that has been sitting at number two for a few weeks that I thought I could discuss. It is a song that, as far as I can tell, has captured the zeitgeist. It's a song I thought would eventually hit number one, and maybe it will. I read something 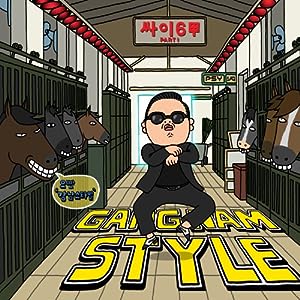 about it being the most liked song on YouTube, or some such nonsense. The song in question is "Gangnam Style" by some gentleman named Psy.

I know very little about this gentleman or this song, as I have not listened to it as I write this sentence. Also, this sentence. I've heard about it in other avenues of pop culture certainly. Craig Ferguson did some sort of dance he called "Gangnam Style" which I assume comes from the musical video. All I know is his dance involved a horse and a robot skeleton and, on occasion, his new character "Beth the CBS Executive" who I am kind of unenthused about. However, this isn't about Craig Ferguson or his show. It's about this guy Psy and his super popular song.

I am pretty sure this song is some sort of KPop outing, which is short for Korean Pop. There's also JPop from Japan and, if I may use a joke I have before, I am waiting with anticipation for LPop, the pop music of Laos. You can go all the way to W on this if you want to include the Middle East and former countries of the Soviet Bloc. I've never heard a KPop song. I expect it to be poppy and in Korean. This is in Korean, right? Somehow that hasn't kept it from being popular in the US of A. Also, this video has been watched over 480 million times on YouTube. To which I say: Holy fuck!

I have now listened to the song. I am one of you now, people. This song has crossed the cultural and verbal barrier to become super popular? It sounds like pretty much any dance/techno song I've ever heard only with Korean lyrics thrown on it. Why has this song really struck a cord with people? Psy's voice isn't good. The music is somewhat irritating to be honest. Have you ever heard a Dance Dance Revolution machine off in the distance? You can sort of here some generic beat, but it is mostly indecipherable. That's what listening to this song feels like to me.

It's not a banger. It's not fun. "Opa Gangnam Style" doesn't really connect with me as a good hook, to the extent it is a hook. Does this song feel as generic in Korea? Does all KPop sound like this? I am really puzzled by this song's popularity, given all it had to overcome to be so popular in America.

Maybe if I could understand the lyrics I might enjoy it somewhat, although it still wouldn't sound good. However, I can't. Not to diminish the Korean language, but to me it is just noises, since I don't understand the words. I could have done without jumping on the "Gangnam Style" bandwagon. I didn't enjoy this song at all. In fact, it was mildly unpleasant. It drones and it is dull and has nothing in it that inspires any joy in me. A Korean artist has struck it big in America, and I cannot fathom how this song made it happen.