America, you're better than this!

Oh America. You used to be so beautiful. Then, you made Maroon 5's "One More Night" the number one song on the Billboard Hot 100 for NINE weeks straight. What man would want you now? In the (admittedly short) time I have been writing these Hit Parade articles, "One More Night" is far and away the worst song I've had to listen to, an irredeemable piece of garbage of which I have nothing positive to say. Now, on this Thanksgiving week (in America, who cares about Canada) I am giving thanks for a 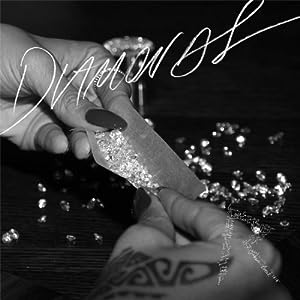 new song atop the charts. That would be Rihanna's "Diamonds."

I was aware of Rihanna before hearing this song, but I had never head one of her songs in its entirety. I knew she was quite popular, and that she had some sort of airplane tour going wrong recently, and that Chris Brown is a piece of shit scumbag, but that's it. So, I didn't really know what to expect from "Diamonds."

It could have perhaps, given the title, been some sort of song about riches and wealth and such but, shockingly, it is a love song. Almost every song that reaches number one on the charts has to do with romance and love and such to some degree. The diamonds are really just there to be a metaphor for two folks who are "beautiful like diamonds in the sky." I don't know what it means. Maybe it is a reference to LSD. Or maybe it's just dumb, empty imagery.

I don't know if the radio version is like this, but the music video version intros and outros with the sounds of the oceans, which also doesn't make much sense in terms of the "diamonds" symbolism. At first, I liked what I was hearing. The beginning of this song has an interesting sound to it that felt unique to me. Maybe it's Rihanna's thing. I do not know. Then, it sort of just devolved into a sort of dance pop song, more so on the pop side. But it's somber pop. Introspective pop. However, when you actually listen to the song, that is all style. There is very little substance here.

The lyrics are generic. Sometimes they are hard to understand. Rihanna sings with an accent at times. It sounds better, but it also can make things a little convoluted in this particular mix. It seems to be more about the music. As long as a few diamond metaphors sneak by, so much the better.

I did like the hook of "Shine bright like a diamond" although for most of the song I thought it was "Shine white like a diamond." Either would have fit in with this song, given the nature of the lyrics. Diamonds are basically a McGuffin in this song.

The music itself is OK, I suppose. It has momentum, it doesn't bother me at all, but after the beginning it also didn't really grab me. I tolerated it I guess I would say.

I could probably say that about this song in its entirety. "Diamonds" is tolerable. It certainly doesn't make me interested in Rihanna. Is her music usually like this? How often does she sing with an accent? Also, that's her right? There were no other names attached to this song. Can somebody just write a song that isn't about romance for once? Well, at least the tyranny of Maroon 5 is over. I hope you have learned your lesson America. You deserve better than that trash. Have some self-esteem. America, you are beautiful, not unlike a diamond in the sky.