Songs We Wish We Could Forget: Aqua - "Barbie Girl" 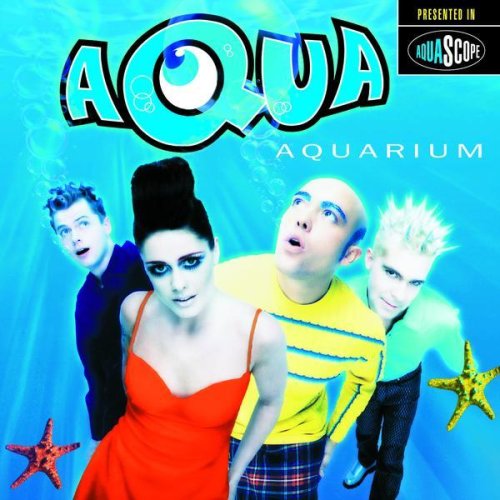 Before embarking on this quest, I had never really, truly listened to the lyrics to Aqua’s “Barbie Girl.” Now that I have, I would like to say for starters: Holy crap. I managed to read this song in two (very, very) different ways. In one way, this song is a scathing satire, and for that at least interesting. In the other way, it is a creepy, repulsive, and misogynistic song. Allow me to explore both options.

First, and more palatably, the notion that the song is satirical. The “Barbie Girl” in question is a reference to the well known doll Barbie. The first question I found myself asking, either to myself or to be left unanswered by a cold, uncaring world, is whether or not this is about a literal sentient Barbie. Are we being brought into a world where Barbie is an actual human being, along with Ken, and we are sort of wading in the image that Aqua had of this doll? Or is a “Barbie Girl” representative of a particular kind of actual person? I know the lyrics mention “life in plastic” but that could easily represent any sort of superficiality, or particularly plastic surgery. Nobody has ever considered Barbie dolls to be representative of what women actually look like, you know?

Well, either way, Barbie in this song is a rather disconcerting figure. She’s vapid, exceedingly slutty, and is willing to bend to Ken’s every whim. Yet, she is very happy in her Barbie world. She tells you to feel free to brush her hair and undress her. Ken refers to her as “my doll” and informs her where to kiss and touch him as they get busy and freaky, in that order. Barbie even refers to herself as a bimbo, and basically says (I presume to Ken) that he can do what she wants with him if he says, “I’m always yours.” Oh, that Barbie!

In the most disconcerting part of the song, the part that makes me really hope this is satirical, goes as follows: “Make me walk, make me talk, do whatever you please/I can act like a star, I can beg on my knees.” That… is unsettling. In the next set of lines, Ken refers to Barbie as a bimbo yet again and tells her it is time to go party, which is something he implores her to do many times over. The song ends with the following conversation between Barbie and Ken:

Barbie: Oh, I’m having so much fun!

Barbie: Oh, I love you Ken!

And… scene! So… apparently Barbie will do whatever a man tells her to do, invites people to undress her, and, provided they will declare their devotion, touch her all they damn well please. Also, she is enjoying the hell out of it. As she says, “Life in plastic, it’s fantastic!”

So, if the song is a satire, it reads sort of like this: Barbie is a superficial bimbo living a pathetic party lifestyle and allows herself to be controlled by the men in her life. Yet, she enjoys it thoroughly, mostly because she is too vapid, too pathetic, and too stupid to feel anything different. In this modern era of reality television and baseless celebrity, this song feels almost like it was ahead of its time. Was Aqua lampooning this kind of lifestyle, using the well known image of Barbie, a plastic, mindless doll, as a representation of the kind of people who are sometimes called derisively “Barbie dolls?” They didn’t invent the concept of using Barbie as a symbol for vapidity and superficiality. They just turned it into a Danish dance pop hit record.

If this song isn’t ironic and satirical, however, then it is truly repulsive, what with the female singer espousing all sorts of unpleasant things. Barbie really allows herself to be treated like shit, including by Ken who, as previously mentioned, certainly seems to be in control of their relationship. It definitely gets into misogynistic territory, but the fact a woman was involved prominently in this song makes me feel that the sincere reading of this song is unlikely. That, or Lene Nystrom has some real issues.

To try and come to a conclusion on this song’s intentions, I decided to watch the music video, which points me further toward “satire” or the very least “irony” but if this song is ironic I have a hard time believing they didn’t want it to be satirical. The video takes place at Barbie’s dream house and, to be honest, is genuinely funny, but again only if I am reading satire into this. The band all get introduced like they are in a 1980s sitcom. They drive around in a pink car that clearly looks plastic. She has a plastic dog which, when she pets it, it falls over. She sings about being a “blonde bimbo girl in a fantasy world” while in a bathtub with a blank smile on her face. As she sings, “If you say I’m always yours,” a thought bubble with a heart appears over her head. Late in the video, a bunch of other doll like people, replete with doll like movements, show up for a party. A party at which Ken accidently rips Barbie’s arm out of the socket.

OK, so the band went quite literal in the video, but that doesn’t mean they aren’t satirizing actual people. I’d suggest that maybe they are satirizing the doll, but how much can you satirize a doll without impressing a lot of your own ideas on it? The doll just stands there with its physically impossible body and eternal smile whilst wearing a variety of outfits.

I fear praising a song I am not entirely sure isn’t skuzzy and creepy, but “Barbie Girl” actually sounds good, or at least the music does. It’s catchy, it has a nice rhythm to it, I like the way it sounds. As for the singing, Lena’s voice is (I presume) ratcheted up to particularly high levels, and at times it gets too high pitched for my ears to handle, but for the most part it’s fine and it fits in well with the atmosphere of the song. As for Rene, who does Ken’s voice, when he sings, “Come on Barbie, let’s go party,” he sounds like he should be hanging out with Steve Martin and Dan Aykroyd’s Wild and Crazy Guys, which I enjoy.

You hear about a song called “Barbie Girl” by a one hit wonder called Aqua, and it just reeks of likely awfulness, or at the very least cheesiness. Indeed, it is certainly a song, and a video, that revels in excess, and if it were taken to such levels sincerely cheesy would be a viable way to describe it. However, the lyrics would not lend themselves to cheesiness because they would be hideously unpleasant and infuriating. As such, if “Barbie Girl” isn’t satirical, or at least ironic, it certainly is one of the worst songs of all time, and one for which there can’t be any ironic appreciation or enjoyment. Ah, but if it is satirical? Well, if that’s the case, then honestly it’s a pretty good song. The lyrics are tolerable, if not still a little unpleasant at times, and the song sounds good. Plus, you throw in a funny video and it comes as no surprise it was a hit.

I feel that in most cases I can tell the difference between sincerity and irony. After all, I watch the Colbert Report. However, and maybe this is due to the fact this is the only thing I have ever heard from Aqua, I can’t come to a definitive conclusion on the tone of this song. Perhaps I am reluctant to make a stand because the song, and the band, really come off bad if this isn’t a satire. All I know is that Mattel wasn’t happy with this song, since they sued Aqua over their manifestation of Barbie as a mindless trollop. I could see why they’d be mad about such things. That’s their job, after all, and Teen Talk Barbie will back me up on that.