Songs We Wish We Could Forget: Starship's "We Built This City"

We all know it's bad but is it really *that* bad? 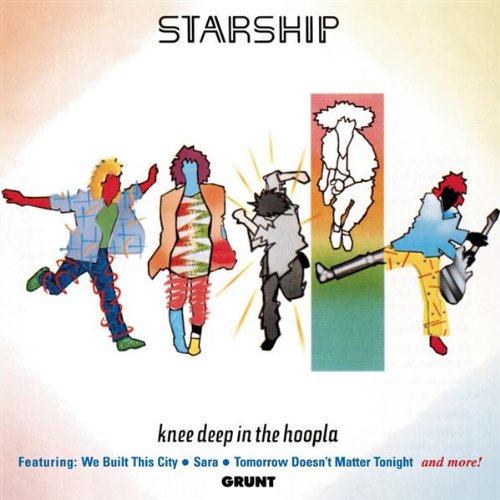 When I was in high school, there was a grassroots campaign to get Starship’s “We Built This City” to be our class song. I was all in favor of it, because even at the time I realized that a high school graduation isn’t something that deserves reverence, and because the other two choices were Green Day’s “Time of Your Life (Good Riddance)” and Eve 6’s “Here’s to the Night” and both of those songs are awful. Unfortunately Eve 6 won out, but since it was a vote held by kids I’m not going to get annoyed with the people that made the choice. Eve 6, on the other hand, will always have my contempt for that grotesquely nostalgic song.

Of course, “We Built This City” wasn’t getting votes because people actually liked it. It was getting votes because a) it was completely incongruous to anything related to a high school graduation and b) the song is considered by many to be the pinnacle of '80s cheese. And, as we all know, anything indicative of a different time period is inherently funny, which is why the Bubonic plague always gets a laugh.

Interestingly, this song was written by Bernie Taupin, who is well known for being Elton John’s primary song writer, and many of his songs are rather good. Of course, one of his songs is “Honky Cat” so there’s that. You’ve got a genuinely talented songwriter and a band featuring some solid musicians. Could they possibly have erred so egregiously as to become the epitome of lousy music?

Well, to be honest, the beginning of the song certainly doesn’t bode well for that argument. It starts off just fine actually. There’s a sort of spacey synthesizer thing going on, subtly but effectively, while it appears Mickey Thomas and Grace Slick’s voices are dubbed over one another and it sounds excellent. Even the lyrics, “We built this city/We built this city on rock n’ roll,” I like. Obviously, no city in the world has ever had a rock n’ roll heavy infrastructure, but I still like the way it sounds, and I like the vibe of it. I appreciate the notion of the idealized vision of a city built on rock and/or roll. Mostly, though, the intro just sounds really good and the lyrics are passable. There’s then a little instrumental break which features what sounds like instrument settings for keyboards. It’s already going a bit downhill here, and indeed the music during the verses never quite match up to the excellence of anytime the words, “We built this city,” are mentioned, though a few good guitar licks are thrown in.

Alas, Mickey Thomas doesn’t bring much effort to the first verse of the song, sounding more or less like he’s talking with a slight rhythm more than singing. The verse begins, “Say you don’t know me/Or recognize my face/Say you don’t care who goes/To that kind of place.” These lyrics are either vague or mysterious, or perhaps a touch of both. What kind of place is he talking about? Why should I say I don’t know him or recognize his face? Granted, both of those things are true, but why express them in song Mickey? He then sings, “Knee deep in the hoopla/Sinking in your fight,” which is also rather confusing, mostly because those are incomplete thoughts. This isn’t just a hoopla, it is the hoopla, and someone or something is knee deep in it. Also, suddenly I have a fight? Or at least, somebody has a fight, and somebody is sinking in it. Is Mickey Thomas sinking in it? Is the fight also the hoopla? I don’t know, all I know is that the next line tells me there are, “Too many runaways eating up the night,” and that could easily be construed as a reference to vampires. Somebody needs to capitalize on that before vampires are passé.

Now, I am at a crossroads. The next line of the song is, “Marconi plays the mamba/Listen to the radio.” Of course, the Marconi in question is Guglielmo Marconi, who contributed a great deal to the invention of the radio. So, I take it that Thomas is using Marconi as a sort of slang for radio here? On the one hand, the phrase “Marconi plays the mamba” is rather silly, especially since mamba is a kind of snake, whereas mambo is a kind of dance. On the other hand, it sounds fantastic. Seriously, that sentence has a tremendous sound to it, especially the way it is sung in the song. Thomas finally breaks free from his talk singing to put a bit of effort into it and I do believe Slick is involved once again. Plus, the way they transition into “Listen to the radio” pacing wise is excellent. Then, they transition that into, “Don’t you remember/We built this city/We built this city on rock and rooooollll,” and that heads into the chorus. The music’s energy picks up, the singing picks up, and everything is sounding good. If only the song could be like this all the time. It was sound exquisite. So yes, I am defending the use of the phrase, “Marconi plays the mamba,” on phonetic terms.

Of course, now that the chorus is over things hit another lull, this time with a bit of vague, almost passive rebellion and politicizing. For you see, “Someone’s always playing/Corporation games/Who cares they’re always changing/Corporation names.” Oh snap! Take that companies who… decide to change their name. I mean, this seems like it is supposed to be a dig on corporations, but which ones and why? Are they simply against the idea of a corporation altogether? Because that would be stupid. Only anarchists hate corporations entirely, and they are for the most part, if not entirely, jackasses. Anyway, after establishing their anti-corporate moniker changing stance, Starship’s real objective is stated. They just want to dance here, apparently, but somebody stole the stage. Apparently, they need a stage to dance on? Can’t you just dance in the streets? Both Martha Vandella and David Bowie seemed to think so.

At least now, after another chorus, the verses pick up. The music gets a bit louder, a bit more energetic, and Slick’s vocals are added to the mix, both in unison with Thomas and occasionally on her own. Unfortunately, the lyrics don’t quite match the sound just yet. For example, “Police have got the chokehold/Oh, then we just lost the beat.” Again, I don’t know what that means, and I think it is supposed to mean something. You know, if it felt like a nonsense sentence in a nonsense song I wouldn’t mind, but I think Starship intends that to mean something and I don’t know what and I find that a bit deflating in regards to my attitude toward this song. Also, if you’ve lost the beat I think The Go-Go’s might have it. Eighties based pop music topical humor!

Now, Starship has some questions to ask us. Namely, “Who counts the money underneath the bars?” and, “Who rides the wrecking balls into our guitars?” While my first guess would be “The Stonecutters” I don’t really have an answer to these questions, although it appears this song might take place in some sort of futuristic world where music is banned or some such thing. It wouldn’t be the first song about something like that. It might even be a city literally built on rock n’ roll which, of course, would be stupid but tolerable, particularly if the song took a lighthearted, winking tone. So, you know, not this song. Although, it has been stated that this song is about 1970’s Los Angeles, so there goes that whole idea unfortunately. Can somebody maybe make a tongue in cheek “B” movie about a city built on rock n’ roll at least? Thanks.

Anyway, the song then incorporates some radio station talk into the song, which honestly sounds pretty good. It flows well, and it reminds me of the phone call part of Guns n’ Roses version of “Knockin’ on Heaven’s Door” which isn’t a bad thing. The DJ is from San Francisco as his reference to traffic on the Golden Gate Bridge indicates. However, he also refers to San Francisco not only as “The city by the bay” but also “The city that rocks” and “The city that never sleeps” neither of which are, as far as I know, an actual nickname for the city. In fact, “The city that never sleeps” belongs to New York City and also probably Las Vegas, though mostly the former. Well, I suppose those nicknames work for San Fran as well. Nobody can claim they aren’t true, since the city in and of itself doesn’t actually sleep since it is just a defined land area and, thanks to earthquakes, it does often rock, though that isn’t really something to celebrate.

While I enjoy the chorus, the fact that they pretty much just repeat it for the last minute of the song is excessive. They do start to sing it in a slightly different way, but nevertheless it doesn’t add much. However, that is only a minor qualm. In fact, I have no major qualms with this song. This is interesting, because this song has finished atop multiple “Worst Song Ever” lists and, honestly, I have to very much disagree. Do I like “We Built This City?” I wouldn’t go that far, but it’s an alright song. If I was somewhere and it came on I wouldn’t be anguished. It is plenty tolerable, and some of it actually sounds really good. Plus, you know, it celebrates rock music, even if it isn’t a particularly rocking song (in fact, I’d classify it as a pop song). Maybe the song just suffers from '80s backlash. Maybe a lot of people just happen to genuinely not like the song. I don’t know why it is so maligned. All I know is Starship’s “We Built this City” is okay in my book, and I shall save my derision for Eve 6’s “Here’s to the Night.”