Go buy "Under Pressure" instead... 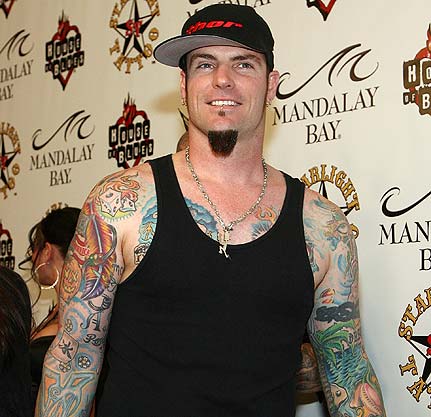 Vanilla Ice is one of the most ridiculous people in the history of time. I almost feel compelled to declare that a fact rather than an opinion. It is hard to separate the song “Ice Ice Baby” from all the goofiness surrounding it and the man behind it. Granted, some of that ridiculousness finds its way into the song itself, but there is so much more absurdity surrounding Mr. Robert Van Winkle. I mean, just the name Vanilla Ice is amusingly inane. Sure, he wanted to broadcast himself as a white rapper (and his reworking of Wild Cherry’s “Play that Funky Music White Boy” just furthers what appeared to be an attempt to profit off his own novelty) but that is, simply put, a bad sobriquet.

Then, there’s the look. Sure, styles change, but at no point in time was Vanilla Ice’s look anything other than ludicrous. The hair, the clothing, the everything about him. It was impossible to take him seriously, and that was even before he performed “Ninja Rap” in Teenage Mutant Ninja Turtles II: Secret of the Ooze. Then, there was his bizarre appearance on MTV’s awesome 25 Lame, when he went batshit and smashed up everything with a baseball bat while Chris Kattan screamed “No Vanilla!” with what sounded like genuine terror in his voice. Also, 25 Lame really feels like the relic of a bygone era since Jon Stewart appears on it. Oh, the days before he skyrocketed to fame on the back of George W. Bush’s awfulness as a President and a human being.

Nowadays, he’s dropped the Vanilla Ice moniker but still performs concerts where, word on the street is, he plays aggressive, awful rock music and makes a general ass of himself. Robert Van Winkle has spent pretty much his entire life in the public eye as a nearly unfathomably silly entity. It is almost mind boggling that there could have ever been a time when people were sincerely enjoying his work, and that includes his magnum opus “Ice Ice Baby.”

The music for this song is notable because it stole the bassline from Queen and David Bowie’s “Under Pressure” and for a while there Mr. Ice tried to deny this painfully obvious fact. It was a risky move from Vanilla Ice, because it can easily lead to people thinking to themselves, “Hey, ‘Under Pressure’ is a really good song. Maybe I should go listen to that instead of this inane monstrosity,” and that’s never good for business. Of course, there’s a good chance most of the people who liked this song had never heard “Under Pressure” which seems like some sort of cosmic injustice.

The song begins with somebody who I presume is Flava Flav on helium telling Vanilla (they are on a first name basis) to kick it boy-eeeeeeeeeee, and kick it he does. Things get confusing when Vanilla tells us to stop, collaborate, and listen. Collaborate on what? And with who? Surely these questions will preoccupy me for the rest of the song. Great, now I can’t pay attention to his dope rhymes! Which is a shame, because I won’t be able to hear such grand lines as, “Flow like a harpoon daily and nightly,” which does not in any way, shape, or form describe what a harpoon does.

It appears I’m not the only one with questions, because somebody then asks Vanilla, “Will it ever stop?” but we never find out what “it” is. Perhaps it is his harpoon like flowing. Alas, even Mr. Ice doesn’t have the answers, merely offering up, “Yo, I don’t know.” He then tells us, “To the extreme I rock the mic like a vandal,” which, and you may be sensing a theme here, also doesn’t make any sense, but at least his next line about waxing chumps like candles kind of makes some sense, inasmuch as candles are often made of wax. Also, I think Vanilla’s line about rocking the mic like a vandal might have something to do with vandals throwing rocks and breaking things, but the action verb relating to throwing rocks isn’t “rock” so it still makes no sense.

Vanilla tells us he’s killing our brains like “a poisonous mushroom” which I really hope is a Super Mario Bros. reference. This also might be the closest Vanilla Ice comes to speaking the truth. This song might not kill our brains, but it certainly isn’t having a positive effect. He also tells us that, “Anything less than the best is a felony,” which I didn’t realize was the case, though my knowledge on U.S. law might not quite be up to snuff compared to Mr. Ice. Then, a bit later comes the all too familiar chorus lead in: “If there’s a problem/Yo, I’ve solve it/Check out the hook while my DJ revolves it.” Oh, so Vanilla Ice can solve all problems? I wish I had known that. Mr. Ice, global hunger is a real issue, and the AIDS epidemic in Africa is very serious. Could you get on that? Thanks. I’ll wait here checking out the hook your DJ is revolving for the time being. As for the chorus, it’s just a lot of repetitions of his name and the word “baby.” Nothing of substance positively or negatively.

Vanilla Ice does manage to drop one good line in this song, though it’s mostly good in how silly it is, when he tells us that he is, “Cooking MCs like a pound of bacon.” Again, it is very silly, but nevertheless it amuses me, but probably not quite in the way Vanilla Ice intended. He then proceeds to give a rather detailed description of a drive he took. Lines include, “Kept on pursuing to the next stop/I busted a left and I’m heading to the next block,” and, “That block was dead, yo, so I continued to A1A Beachfront Avenue.” Then, suddenly and without warning, things get real. Vanilla and some guy named Shay have apparently got guns, which is good because apparently some chumps are acting ill because they are full of eight balls. Then some gunshots go off, and so Vanilla falls to the concrete and yet, somehow, also managed to jump in his car and slam on the gas. He’s a wizard!

Vanilla talks about wanting to get away before “the jackers jack” and I have no clue what the hell that means. Listen, I won’t claim to be hip to all the street lingo of the world, particularly from the early '90s, but I have never heard anything along those lines in my life in any and all of the other rap songs I’ve listened to. Anyway, the police show up, but they pass Vanilla up, but there are conflicting reasons why. I listen to these songs on YouTube with videos that show the lyrics, but there have been a couple of occasions where the person has had the lyrics wrong. In one version of this song on YouTube, somebody mentions the “dope scene.” In another, more hilarious, version, the video creator transcribes it as “dope beans.” I really wish that were actually the case. However, the way I hear it is “dope fiends” which would make a ton of sense. Indeed, a lyrics search seems to indicate my dope fiends interpretation was correct.

At this point, the utter awfulness of Vanilla’s lyrics speak for themselves, but there are still a few more worth pointing out. For example, in what is unquestionably the worst lyric in the song, after comparing his styles to a chemical spill (so… noxious?) he says he has, “peaceful rhymes you can vision and feel.” Yes, he used vision as a verb. He tried to pass off vision as a verb, and I have no clue why. He could have easily said “see” or several other words. Why, Vanilla? Why write such a thing? I mean, apparently he wrote this song when he was 16 and I wouldn’t disparage a teen ager for bad writing. It would be uncalled for and unfair. However, this song was released in 1990, when he was 22 going on 23. There’s no excuse for not fixing those lyrics. You didn’t bother coming up with your own music for the song. You couldn’t at least work on the lyrics a bit?

Then, of course, to cap the song off, there’s Mr. Ice’s infamous, “Word to your mother” bon mot which has been repeated ironically approximately 12 billion times at this point. It is a profoundly dumb thing to say to be sure, and it certainly follows in Vanilla Ice’s longstanding tradition of saying things that make zero sense. The thing is, it comes at the 3:30 mark or a 4:32 song. The rest of it is just more “Ice Ice Baby’s” with some “Too Cold’s” thrown in for good(?) measure. It is, to put it mildly, a bit excessive.

When I listen to this song, it leads me to wonder if Vanilla Ice’s success was built almost entirely on the novelty of his status as a white rapper. Nothing about this song is good. The lyrics are terrible, and the beat is stolen from much more talented musicians. Yet, somehow, Vanilla Ice became a huge household name and got to rap while Leonardo, Donatello, and the rest of the gang fought a mutant snapping turtle and a mutant wolf (or some sort of canine… also Super Shredder.) Of course, nowadays people just laugh at the absurdity of Vanilla Ice’s early '90s antics and when you look at the whole package that was Mr. Ice, it’s not surprising to see that happen.