The journey continues with the second album in Weird Al's lengthy discography.

Soon after I had finished and submitted the first entry in this series, a tale about Weird Al Yankovic's self-titled album, guess who was a guest on Ken Plume's A Bit of a Chat podcast? No, it wasn't former NHL journeyman Jamie Macoun. It was the man himself, Weird Al. Thanks to that conversation, I learned some things about Al's first album that were enlightening. Mostly what I came to find out was how rushed and low budget the album was. In essence, Weird Al Yankovic was Al and company's shot at a record deal, but first they had to hurriedly record 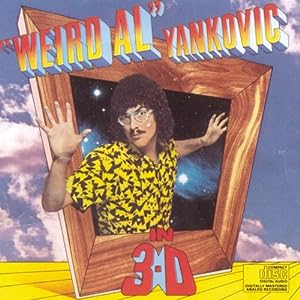 something to sort of serve as proof. It's like when a film maker makes a black-and-white short film in order to secure funding for a full-length version. So, in a way, Weird Al Yankovic was Al's Bottle Rocket.

It certainly helps explain the sound of the album, and the nature of the songs, when you realize something like "Another Rides the Bus" was generated in about a half hour. To Weird Al's credit, that's a pretty alright song. It doesn't mitigate the fact that Weird Al's debut album is sort of clunky and hit-or-miss, but it does sort of explain it, and it certainly makes me take it with a grain of salt. Plus, in the end, it apparently was proof enough that Yankovic was on to something, since he got that record deal and was able to produce his second album, 1984's Weird Al Yankovic In 3-D.

If the debut album was like a Weird Al beta test, this album feels like the first introduction to the Weird Al we've come to know. For starters, the production values are clearly increased, and it does feel like more time was put into it, now that there was time to give. The band also starts to really show their chops when it comes to mimicking musical styles. While Weird Al doesn't do straight cover songs when they do their parodies, or songs that are designed to be in the vein of a specific song of genre, they try and make it sound somewhat close, and they succeed at that. It has become more commonplace, at least in the circles I travel in, to give credit to Al and his band for their ability to play many different styles of music reasonably well, albeit with some accordion and goofy sounds thown in. I have to concur. The reggae song on this album, "But Me a Condo" sounds like a reggae song. It isn't particularly good, but it sounds fine. My issue is that beyond sounding like a reggae song, there isn't much here, humor or otherwise. It's just a song about buying a condo and other stuff.

Weird Al Yankovic In 3-D, and while I am at it I'd like to point out that I like this as an album title, since it sort of gives off a gimmicky '80s sequel vibe, was quite successful, climbing all the way number 17 on the Billboard charts. This is, I assume largely based on the success of the first song off this album. If "Ricky" on the eponymous debut served as an apt indication of who Weird Al is and what he does, the first song off this album is an indication of his ability to really connect with the pop culture, and that he had staying power. That's because the song in question is "Eat It."

Everybody knows "Eat It." It's one of his most popular songs. It is part of the reason the "Weird Al does food songs" notion exists. Well, that and the fact he actually does do a lot of food songs. Michael Jackson's "Beat It" is a legendary song. Parodying it was a good idea in terms of gaining attention from folks who weren't into Dr. Demento or what have you. MTV's existence probably helped. Here's the thing, though, at least from my perspective: "Eat It" isn't all that good. Don't get me wrong. It's a decent song. It's somewhat funny. It just doesn't do enough for me as a song or a source of humor. "Eat It" symbolizes something I mention in the first part of The Weird Al Chronicles. A lot of what he does, or at least was doing early on, is just taking a song and working some lyrics into it that were kind of silly. Al is just singing about food and eating. Sure, it is somewhat humorous that this is a song that exists, and that it apes Jackson's serious number, but beyond that, there isn't much there. I don't really laugh. There's some clever stuff in there, and in a lot of Al's songs, particularly the parodies. Even when he is being supremely silly, which is often, he's still clever in his silliness. However, legendary Simpsons writer George Meyer, whom I love to the extent I am capable of loving, has said, "Clever is the eunuch of comedy," and to an extent I agree. I appreciate the cleverness of "Eat It" and songs in that vein. It just isn't funny enough or musically pleasant enough to be a truly good song to me.

While "Eat It" is the only song from Weird Al in 3-D that has really stuck around, with "I Lost In Jeopardy" also somewhat well-known, two songs I had not heard before stuck out to me as being particularly good, one original and one a parody. The original is the second song on the album, a little ditty called "Midnight Star" that's about tabloids, but the Weekly World News kind of tabloids, stuff like aliens and Bat Boy and what have you. Not only is it a solidly constructed song, and again I want to point out the production value on this album is much higher and the band is much tighter, but it's funny. Weird Al has always excelled when he sort of just gets to play madlibs and make up ridiculous stuff. In these instances, his attention to detail is clear. Details can often make the joke.

The other song is a parody of "King of Pain" by The Police entitled "King of Suede" and it is about a clothing salesman. This is the best sounding song of the album, and is a more interesting place for a parody to go than some of Al's other choices. By the way, it's totally cool that I keep calling him Al. He favorited a tweet of mine. We're, like, close friends now. I also found a couple of songs interesting. "The Brady Bunch" is a parody of "The Safety Dance" by Men Without Hats, a song I genuinely enjoy, that started off sort of non-descript but then it just devolved into Yankovic singing the theme song to The Brady Bunch. It was odd, but in a way I found interesting and amusing. Weird Al and I share a love of pop culture, so sometimes we just end up on the same wavelength. If only I loved food... Speaking of pop culture, the final song, "Nature Trail to Hell," features Al discussing a movie of the same name, an over the top slasher flick that is, naturally, in 3-D. It is sort of like the song version of a Joe Dante film, which is not without its merits.

It should also be mentioned that this album features Weird Al's first polka medley, a staple of his albums. These songs are almost always decent enough, and they deliver what they promise. They are also occasionally somewhat jarring, however, as the songs Al chooses tend to be of a more mature, adult vein that what he usually records. I know in the "Alternative Polka" on Bad Hair Day is bleeped the word "fuck" from "Closer," but he still sings "I wanna feel you from the inside." There's nothing quite on that level of that on this particularly medley. The album also features "Mr. Popeil," which sounded odd to me until I realized it was a B-52's style parody. It didn't make it better, but it did make it explicable. There's also an "Eye of the Tiger" parody entitled "The Rye or the Kaiser." How you feel about that title will tell you how you will feel about that song.

Weird Al Yankovic in 3-D was much more of what I expected, based on my past Weird Al experience. It's a better album than the first one, although I wouldn't quite call it good. It's a decent album. I liked a couple of the songs, and thought a few of the others were OK. The album certainly felt more ambitious, the music is better, and the song ideas are smarter and better fleshed out. Plus, being able to really hit with something like "Eat It" presumably helped shape Al's career going forward. He figured out what clicks, and had sort of a template going forward. Obviously, the nature of Al's music means there has always been plenty of room for him to explore, but thanks to the success of that song and this album, Weird Al Yankovic had the chance to become the venerated musician he is today.