The Weird Al Chronicles Part III: Dare to Be Stupid

Weird Al takes on Madonna and continues to hone his craft in his first album that doesn't bother to drop his name.

Even though it was his second album, Weird Al Yankovic In 3-D felt like the first true Weird Al album. He just kept churning out the material in the early days, as in 1985 he released his third album, and for the first time Weird Al made the bold 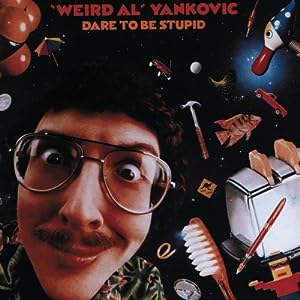 decision of not including his name in the title. Instead, he christened it Dare To Be Stupid, the rare Weird Al album named after a song on said album.

It picks up where his last album left off in terms of quality and continuing to develop as an artist. Or, should I say, as a band, because I don't want to leave the other musicians that work behind Weird Al out of this. Let us not forget them, the Blowfish to Weird Al's Hootie. Well, most of the album is a step forward, or at the very least a parallel move, aside from "Girls Just Want to Have Lunch." This parody of "Girls Just Want to Have Fun" feels quite flat and tossed off, the music is rudimentary and the lyrics not very funny. Also, Weird Al sings in an odd fashion. Even though he is doing a riff on a Cyndi Lauper song, he sings it in a very masculine, butch fashion. It didn't work. However, I heard somewhere from the man himself that the record company pretty much demanded a Cyndi Lauper parody, and Al reluctantly obliged. It certainly shows.

Fortunately, "Girls Just Want to Have Lunch" is nestled deeply in the middle of the album, and instead Dare to Be Stupid starts off with a dynamic duo of songs. First, the well-known "Like a Surgeon," the Madonna parody. Unlike "Eat It," this song holds up to me in terms of living up to its beloved reputation. It's funny and clever and actually has some substance to it. "Eat It" is basically just "Beat It" but about food. There's actually a narrative to "Like a Surgeon." It's about a bad surgeon, one who barely passed at the institute. There's actually something going on here besides two songs sounding alike, and I enjoy the lyrics. It also sounds plenty fine, building it up off "Like a Virgin" help, but here, unlike with "Girls Just Want to Have Lunch," he sings in a more feminine manner, which helps.

The second song is the titular "Dare to Be Stupid," a song in the style of Devo. It doesn't really have much to it except telling people to feel free to do a bunch of stuff that might be considered "stupid." In fact, I would even go as far as to say that this song dares you to be stupid. Being able to just name dumb things admittedly helps Al out, because he is original and smart and excels when he gets to just come up with silly stuff, but that doesn't mean it isn't funny. Plus, it's just a pleasant sounding song, unlike most actual Devo songs.

There are two more good songs on the album, and all four of them, for whatever reason, are on the first side of this album, back in the days of cassettes and such. One of them is "Yoda," the parody of The Kinks' "Lola" about everybody's favorite green puppet (take that Kermit the Frog, you asshole). I am kind of surprised this song hasn't quite gotten the general love of songs like "Eat It" because it combines Weird Al AND Star Wars, two things that probably have pretty big overlap in a Venn Diagram. However, I am not a tastemaker. "Yoda" is one of my favorite Weird Al songs, owing only in part to the fact I really like the original by The Kinks. I'm not actually a big Star Wars guy, but I have seen all six of them, and enjoyed half of them (guess which half, the answer won't surprise you) but I am not a huge fan or anything. Of course, my knowledge of Yoda and his role in the original Star Wars trilogy is necessary to enjoy this song, but I don't enjoy it BECAUSE it's about Yoda.

When you delve into pop culture for your songs like Weird Al often does, you risk alienating part of your potential fanbase, but then again perhaps that's why he tends to reference things like I Love Lucy and Stars Wars. Anyway, "Yoda" is one of the funnier, more clever Weird Al songs. I mean, "I know Darth Vader has really got you annoyed/but remember if you kill him then you'll be unemployed," is just a top notch lyric. It is one of many. Al is able to just amble along in a somewhat talk-singing manner, regaling us with tales of Luke Skywalker and Yoda and it is a lot of fun to listen to.

The other song I enjoyed quite a bit was the original "One More Minute." It's very similar to "Since You've Been Gone," from Bad Hair Day, but that's OK, I suppose. It's a doo-wop song, but instead of being a love song, it is very much the opposite. It's about how much Al despises his ex-lover and can't stand being around her. Again, Al getting the chance to list all the things he'd prefer to spending even one more second with this woman allows Al to stretch his brain and come up with interesting, humorous stuff. Also, "This is the Life," from the soundtrack of the solid but under the radar Michael Keaton movie Johnny Dangerously is a decent song as well. I guess what I am trying to say is watch Keaton's Night Shift. That movie is quite funny.

The rest of the album is hit-or-miss. There's a polka song, which is typical of his polka songs, including featuring a lyric that Weird Al wouldn't put into his own songs, although perhaps back then people didn't realize what the chorus of Frankie Goes to Hollywood's "Relax" meant. "Cable TV" is a flat original that feels quite dated. He does the "George of the Jungle" theme, which is alright. "Slime Creatures from Outer Space" feels like a "Nature Trail from Hell" retread. It's the same sort of pop culture homage to nothing in particular. Then, there's "I Want a New Duck" which is a bit of a stretch just to do a Huey Lewis parody. Are we sure "Girls Just Want to Have Lunch" wasn't the only tossed off song written out of necessity?

Fittingly, Dare to Be Stupid is Weird Al's best album of his first three. There are improvements on both his parodies and his originals, although they aren't all better than previous efforts. There's not the same increase in musicality, because there wasn't as much room to grow, but Al's singing got better in terms of matching the tone and genre he was going for. Plus, "Yoda" is on this album.

However, as I listen to these albums, I realize that I am missing out on a key part of the Weird Al experience, and what made him so popular. Weird Al's rise and the rise of music videos go hand in hand. Furthermore, videos give Al the chance to add more comedy, and to engage his sense of humor further. It's one thing to do "Eat It," it's another to also have a music video for it that riffs excellently off of "Beat It." In terms of discussing his music, it isn't apt, but in terms of discussing Al's career, one must mention the success of his music videos. The fact that MTV was in its early days, and days when it still showed music videos, helped. They had to fill space, and why not show videos that remind people of Michael Jackson and Madonna, especially when they are funny and play well to a younger, teenaged audience? In the end, perhaps Weird Al is as much a visual artist as a musical artist, and merely listening to Dare to Be Stupid just can't cut it.