A posthumous celebration of a harmonica master 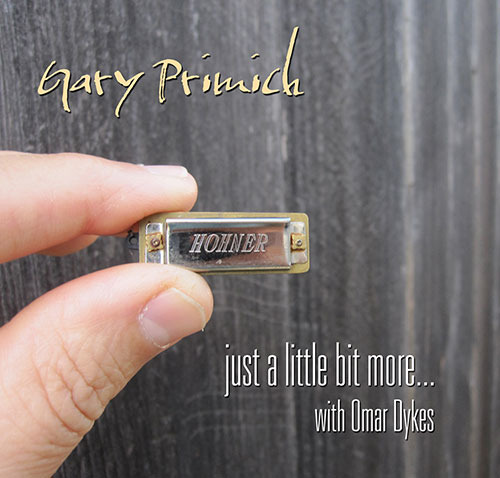 Gary Primich left us all too soon, taken by an accidental drug overdose in 2007 at the age of 49. (Ironically, his final recording was called Riding The Dark Horse). Just A Little Bit More, clearly a labor of love steered by Gary’s father Jack, collects tracks released on several different labels between 1994 and 2006, as well as some he recorded with his friend and sometime employer, Omar Kent Dykes. Indeed, the disc is subtitled ‘with Omar Dykes,’ and it’s thanks to Dykes that there are seven previously unreleased tracks included that, a few technical glitches aside, stand up well indeed.

Born in Indiana, by the mid-eighties Primich was an integral part of Austin’s active blues scene, and far too many familiar names are sprinkled throughout the credits to list here. Suffice to say that Primich worked with the cream of the crop, seasoned musicians capable of laying down deep and utterly unstoppable grooves.

And oh, what magic Primich would lay on top of those grooves!  Though quite capable of mimicking the masters at will, Primich had his own sound and style, whether tackling left-field choices like Duke Ellington’s “Caravan” or Kurt Weill’s “September Song,” hard-core twelve-bars like Jimmy Reed’s “Caress me Baby” or “Down In Mississippi,” or his own quirky, witty compositions. Whatever the material, Primich took a craftsman’s approach, and despite his varied musical interests there’s a remarkable consistency to his work. A laconic singer who knew enough to work within his admittedly limited range, his harmonica playing varied from paint-peeling-powerful to exquisitely shaded and finely nuanced – but it was always endlessly inventive.

Relentlessly creative, Primich avoided all the typical blues clichés in both his writing and his playing. His songs are full of wry observations and self-deprecating humor, and he never stopped exploring and expanding the harmonica’s expressive capabilities. A master technician with precise control (just listen to his rich, jazzy chording and intricate runs on “September Song” or the sheer, exuberant swing of “Indiana”), he was also a generous bandleader, and participants in the project all get lots of solo space as well. In the end, though, Primich understood the value of restraint and invariably put the collective ensemble first – as a sideman himself (most of the unreleased material finds Dykes up front, Primich growing weary of the work involved in running a band), he knew it’s not about the notes, but all about how the pieces fit together.

Recording quality on the new material is acceptable, although there’s an audible glitch on one track and a few tracks are a bit muddy in the mix. Still, it’s wonderful simply to hear Primich again, and any production issues are eminently forgivable given the sheer quality of the performances. The essay that accompanies the project is a heartfelt tribute that captures the essence of the man, and can’t be recommended highly enough.

It’s a terrible shame that one of the finest blues harmonica recordings to come along in a while turns out to be a posthumous collection. Primich was one of the good ‘uns, and this is a wonderful tribute to his legacy. Highly recommended!