As “Harry Shearer,” Derek Smalls of Spinal Tap has achieved an enormous amount of success. He has conquered the worlds of television, film, radio, and as a solo musician. It is with this in mind that I wonder if the title of his latest album is a direct statement to his Tap bandmates Nigel Tufnel and David St. Hubbins. Can’t Take a Hint seems sum up his feelings about his ne’er do-well partners, but maybe that is the whole point. 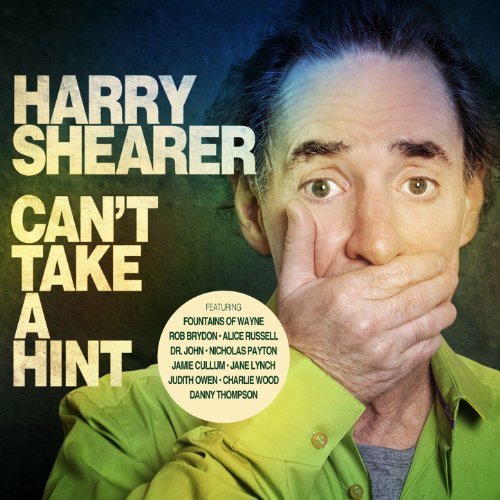 In deference to Small’s obvious wishes to keep himself and “Harry Shearer” separate, I will try and refer to him as Shearer throughout this review. It is a little difficult though, much like it was with Tony Clifton and his “Andy Kaufman” character. In any event, the 13 songs that make up Can’t Take A Hint show that Shearer is not only a very talented musician, he is also quite the satirist.

Opening track “Celebrity Booze Endorser” features alternative rock heroes Fountains of Wayne as Shearer’s backing band. His lyrics nicely skewer the propensity of celebrities to…well, endorse booze. On “Autumn in New Orleans,” the one and only Dr. John guests for a very cool homage to Hoagy Carmichael, via The Big Easy. The good Dr. is not present for “When the Crocodile Cries” though, in fact Smalls, oops - I mean Shearer sings. The song does have a kinda sorta New Orleans feel, by way of Australia, for that is the home of crocodiles, not alligators. And the biggest crock of all is Rupert Murdoch, whom Shearer skewers mercilessly.

Another target for the wicked pen of Harry Shearer comes during the song “Macondo.” With Rob Brydon handling the vocals, the song is about the famous BP oil executive who whined and “wanted his life back” in the aftermath of the 2010 oil spill disaster.

“Deaf Boys” is Shearer at his wicked best. The song is an ode of sorts, to a form of evil that is impossible to fathom. The track is a Gregorian chant-inspired work which acknowledges an amazing feat by Catholic priests. Priests in the U.S., the U.K., and in Italy, managed to molest 200 boys in one week. They must be proud of themselves for destroying so many lives in such a small amount of time.

Although there is quite a bit of satire on this album, Shearer does take time to praise a true American hero. You may not remember him, but with “Joe The Plumber” the man who managed to grab his 15 seconds of fame during the 2008 election season is celebrated. He came out as a “regular Joe” for John McCain, and had plenty to say. As we learned later, his name was not Joe, and he was not a plumber. This made him the perfect candidate, where (to quote The Beatles) “Nothing is real.”

Can’t Take a Hint boasts an impressive list of guest musicians. A few more besides those already mentioned include Jaimie Cullum, Steve Lukather, Judith Owen, Alice Russell, Jeff “Skunk” Baxter, and Jane Lynch. This “Jane Lynch” character has created a second career in a nearly identical fashion to what Derek Smalls did with Shearer. You see, Jane Lynch is actually Laurie Bohner of The New Main Street Singers folk band, who were featured in the film A Mighty Wind (2003).

All three members of Spinal Tap appeared in that film as well, as The Folksmen. They did a great job of it too, even though in reality they were  recording as The Thamesmen, and had a pop hit with “(Listen to The) Flower People.”

As Jane Lynch, Bohner has become very successful on television. She stars in Glee, and even hosted the Emmy awards. Bohner/Lynch has actually upped the ante on Smalls/Shearer by “outing” herself as a lesbian. The fact that in real life she is married to fellow New Main Street Singer Terry Bohner is not even talked about. What a strange world we live in!

Can’t Take a Hint closes with another bit of topical hilarity, “Touch My Junk.” The song was written as sort of an answer to what one outraged man famously said to an overly enthusiastic airport security guard: “Don’t Touch My Junk!” Harry disagrees, and invites them to “Touch My Junk” in the song. After the real-life Derek Small’s embarrassing foil-wrapped cucumber incident that was captured for posterity on This is Spinal Tap, he has adopted the motto that “A pat-down is for now, radiation is forever.”

Can’t Take a Hint is one of those rare comedy records that also works musically. Consequently, it is one that I will be listening to many times, as it is filled with great jokes, and great music. Naturally, Shearer plays bass on nearly all of the tracks, although I think he put in a red herring by giving Danny Thompson bass duties on “Cold is to the Bone.”

All in all, I have to admit that I really do like this album. But what we are all waiting for is some new Tap product. Shark Sandwich II perhaps? The guys could even turn the table on mediocre critics by actually calling it Shit Sandwich. As far as I know, “Jazz Odyssey” and the Jack the Ripper rock opera Saucy Jack remain unrecorded. This Harry Shearer character has done amazingly well for himself over the years. But we really do need a good dose of Tap, in all their glory. I would love to see Derek pull out his patented double-neck bass onstage once again.

Harry Shearer, Derek Smalls, what’s in a name, right? Can’t Take a Hint is kind of like one of the few good solo Beatles records. It’s not quite the full monty, but it’ll do. In fact, if one ignores the nagging question of where are David and Nigel, and just listens to it on its own terms, Can’t Take a Hint is a damn fine album.