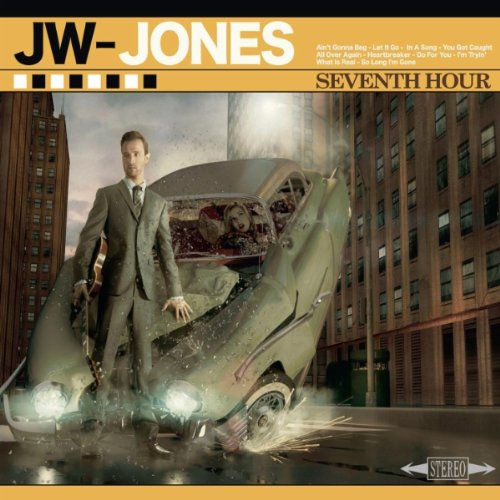 Seventh Hour is the seventh release from guitarist JW-Jones, the successor to Midnight Memphis Sun, an album he cut in Memphis' famed Sun Studios and featured a cameo from Blues Hall Of Famer Charlie Musselwhite. Previous Jones records have featured other blues heavy hitters like Hubert Sumlin and Kim Wilson. It has to feel to good to have the respect of such luminaries and to have them adorn your compositions and records but there comes a time when you're ready to leave the nest and Jones does that here, relying only on himself and his band.

He isn't a slave to convention and he doesn't play it safe for the purists or traditionalists, opening the record with the hard-charging "Ain't Gonna Beg." He wastes no time displaying his impressive command, firing off some searing guitar licks with two smokin' solos built over a stomping beat.

"Let It Go" has a strong rock flavor with a gritty sound in both the rhythm and lead guitar work while "In A Song" has a bit more traditional feel to it. The impressively constructed guitar solo in "Song" is guaranteed to coax a little sweat under the hot lights of clubs worldwide night after night.

"All Over Again" is another highlight that again soars on the power of Jones' fretwork and "Heartbreaker" changes things up with some countrified rockabilly sound.

Music lovers have all heard the expression "for a singer, he makes a good guitarist." That's not exactly true of Jones. He's a pleasant vocalist never difficult to listen to but he can't match vocally the expansive expressiveness he does with his guitar.

JW-Jones takes a strong, assured step forward on Seventh Hour, playing as well as ever. Don't be surprised if this album elevates his stature and notoriety among contemporary bluesmen.