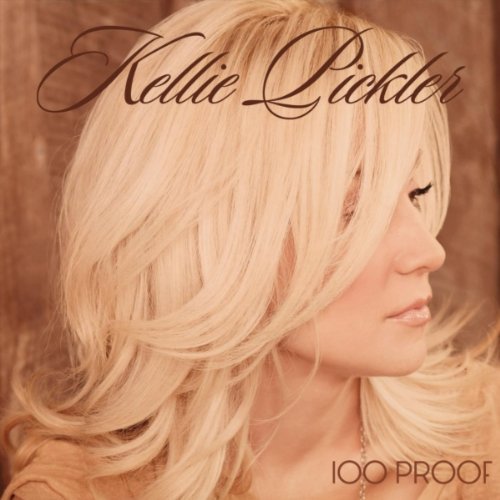 She captured the hearts of America during season five of American Idol with her infectous smile and personality. America's good ole country girl has made a splash in country music since her debut album Small Town Girl came out in 2006. It went on to sell 877,000 copies, and along with her sophomore release, Kellie Pickler, Kellie has become the eighth highest grossing Idol contestant and she didn't even win the contest. Kellie's first two albums featured a more country-pop style in the vein of Shania Twain, Faith Hill, and Taylor Swift (her best friend). 100 Proof changes all of that and brings Kellie back to the roots of country music.

The album opens with "Where's Tammy Wynette." It's a nice intro that bridges the type of music Kellie fans are used to with some old school country music. "Unlock That Honky Tonk" bleeds old-school country in the vein of Reba in her hay day. It's a fun and peppy song.

"Stop Cheatin' On Me" is a nice lover's lament that harkens back to Dolly Parton's style. It's a fun song, but begs the question why are you still there if he is still cheating on you? Why not just leave instead of threatening to cheat on him as well? Seems odd, but it makes for a good song. I especially like the guitars in this one and the swing style bass line.

"Long As I Never See You Again" sounds like a good song to follow "Stop Cheating' On Me" in title alone. I guess she took the advice I gave her above, but then I am probably just full of myself. The song is a nice ballad that reminds me of something LeeAnn Womack would do. I like the lyrics in this one.

The albums first single, "Tough," is up next. The video for this song hints to the real life situation that Kellie has dealt with her whole life, her father's criminal history. When I first saw the video I was impressed with the song and the content. I was more suprised when I found that she didn't co-write this one. "Tough" is a strong song from this album and is made stronger by the video.

"Turn On The Radio and Dance" is not quite a ballad, but it is a soft song. With sweet lyrics and soothing music, this is one of my favorites on the album.

"Mother's Day" is co-written by Kellie, and if you know anything about Kellie's past you know how tragic the story of her family is. She grew up without her mother in her life after being abandoned by her. Kellie has tackled the topic of her mother on past albums with the heart wrenching song "I Wonder." "Mother's Day" is another heart breaking and emotional song. Kellie has a great knack for letting her emotions out and she sings this song so beautifully that it almost brings you to tears.

"Rockaway (The Rockin' Chair Song)" is a nice ode to, I would imagine, her brand new husband Kyle. "Little House On The Highway" brings back some foot tapping, line dancing country music. It's a very fun song that makes you want to get up and move.

"100 Proof" is the title track for the album. The song has a nice smooth vibe featuring relaxing dirty guitars, sweet slide guitars, and a nice ballad feel to it. The lyrics are solid in my opinion. I really like the song and can see why it was chosen as the title track.

"The Letter (To Daddy)" closes out the album in tearjerker fashion. As mentioned above, Kellie has had a tragic past. Kellie's dad was a drunk and drug abuser who has had many run-ins with the law. During her time on Idol, he was in jail for aggravated assault and battery. He got out of jail just one week after Kellie's elimination on Idol. Kellie's love for her dad has never wained and this soft short song is a nice ode to him from her letting him know that. It is a sweet way to close down the album.

100 Proof is a nice album that pays tribute to the roots of country music. Kellie has a great voice for this style of music and it shines on this album. While the album itself is a little bit of a departure from the style of her first two, it still feels right at home in her catalog. Kellie co-wrote six of the albums eleven songs. Overall, I would say that 100 Proof is a solid effort from Kellie. It has some emotional songs, some fun and peppy songs, and is a nice blast of old school country.