'Stronger' is schizophrenic and static at the same time, adding up to a mediocre effort... 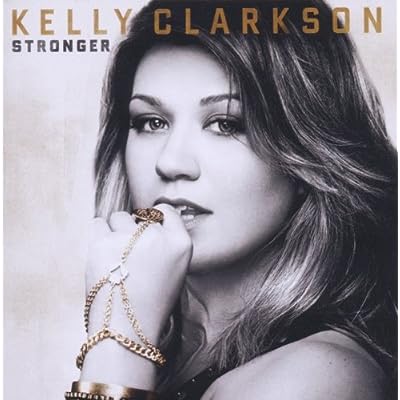 Kelly Clarkson’s Stronger is less strong and more “Fair To Middlin’” as she takes us on a 13-track rollercoaster ride that feels bumpy at best, disconnected and amateurish at its worst. I got my hands on the deluxe version which has four more songs, including the mega-hit duet with Jason Aldean, “Don’t You Wanna Stay” and sadly it’s one of the strongest songs on her album, if not the strongest song. Let’s not get ahead of ourselves here; we have a lot of tunes to cover.

Stronger begins with “Mr. Know It All” and “What Doesn’t Kill You (Stronger)” which I’ve already reviewed separately; I liked one, hated the other. “Dark Side” opens with a creepy ballerina-in-a-child’s-jewelry box tune that has me distracted because I’m making sure my blinds are shut. Her voice is fittingly haunting as she delivers lines like “There’s a place that I know/It’s not pretty there if you have ever gone/If I show it to you now/Will it make you run away?” which sounds to me like showing someone the vulnerable, ugly, scary parts inside us all and wondering and hoping the person who sees it will stay in spite of it. The chorus is too bouncy and happy for the lyrics, ruining the song.

By the time we hit “Honestly” I’m already very weary of the “you wronged me, you’re a bad person but I’m wise to you now” theme we have going on here. Isn’t this the theme on all Clarkson’s albums? Do people keep screwing her over, or does she keep surrounding herself with losers, or both? Either way, it’s draining the life out of me on Stronger.

“You Love Me” promises me a lot in the opening strains, it’s poppy and has a decidedly ‘80s feel to it, but the lyrics “I’m not good enough” and “you just opened my eyes while breaking my heart” get old quickly. “Einstein” is supposed to be fun, I get it but “dumb plus dumb equals you” reminds me of the fake boy band 2gether’s “U+ME=US (Calculus)” and I’m this close to writing this album off as not worth mine or anyone’s time.

Then “Standing In Front Of You” happens and while the title tells you all you need to know about the song, (not knowing what you have, while it’s looking at you the entire time), it’s still a nice change of pace and her voice sounds gorgeous, here. “I Forgive You” is dance-y and fun and is very similar to“What Doesn’t Kill You” and while it houses no real substance, the lyrics “I forgive you/We were just a couple of kids/Trying to figure out how to live/Doing it our way/No shame, no blame/Cause the damage is done” kicked me in the gut a little because it wasn’t expected in this otherwise shallow song.

The next several songs songs are more “you don’t deserve me, I’m dumb enough to linger, is anybody listening?” drivel we’ve been trudging through in the previous songs. “You Can’t Win” is the next to last song on the regular (non-deluxe) album and it’s a hard-driving rock anthem that Kelly die-hards will love. “Breaking Your Heart” does just that from the opening, squeaky guitar chords and Kelly’s soft and damaged voice almost physically hurt me, in a good way. This is the most mature song on the entire album and has the best lyrics. It’s also the one we’ll most likely hear on Country radio.

The four song deluxe portion starts with “Don’t You Wanna Stay” (duet with Jason Aldean) and it’s still the highlight of the album, and flows nicely with the previous song. Seeing as how the two “strong”est songs on her album are country, why doesn’t the Texas native throw in the dance-pop with a rock edge towel and go in this direction? As if to punctuate my point, “Alone” starts with more high school lyrics, followed by the worthless “Don’t Be A Girl About It.” We close with another highlight, “The Sun Will Rise,”  which is exactly what the title suggests (Kelly doesn’t’ like to leave anything to the imagination, apparently), an inspirational little tune telling us “It’ll be all right” and I believe her because mercifully… Stronger is over.

There were bright spots in Stronger but not enough to make me want to listen to it again on purpose. Thirteen songs were just too many, and 17 in the deluxe was overkill. I know she said they had a lot of material to sort through; I just don’t understand why they didn’t go for quality over quantity. Cutting three or four songs would have improved this album drastically.