This could have worked but it didn't 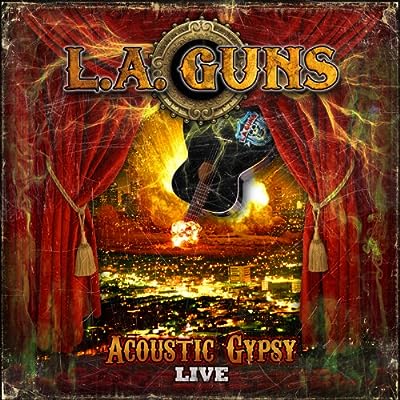 Glam rockers and Sunset Strip veterans LA Guns have a new record out of all acoustic material called, cleverly enough, Acoustic Gypsy and recorded fittingly at Hotel Café in Hollywood, California. After nearly 30 years and a history as sordid as its door is revolving, the Tracii Guns version (we’ll get more into this later) has recorded its first and hopefully last acoustic record.

To have a successful acoustic or unplugged album -- I’m judging success by overall and finished product, not album sales -- you need a few components. Paramount to all of these is a pleasant singing voice. Current lead singer Jizzy Pearl isn’t a person I want to hear sing without very loud guitars, distortion, heavy drums and maybe even several drinks- for each of us. I know Pearl is legendary and I have loved several of his songs and his voice is a distinct, great rock voice. But to LA Guns is Tracii Guns and Phil Lewis; without Phil’s vocals, this feels like a cover band.

Where is Phil Lewis, you ask? Well we don’t have enough time or Prozac to cover all that but, I can give a very brief and condensed version of what’s up. In a word: ego. Too simple? In three words: Tracii Guns’ ego. Phil Lewis and Tracii Guns don’t like each other and cannot get along long enough to write, record, or perform music together. So we have two separate touring versions of LA Guns and they are seriously referred to as Phil Lewis’ LA Guns and Tracii Guns’ LA Guns.

Tracii Guns is actually the “Guns” of Guns N Roses, back when Tracii started LA Guns, Axl Rose was briefly a lead singer. Axl left to form Hollywood Rose which eventually merged with LA Guns. They combined the groups, their talents and their names, becoming the original lineup of Guns N’ Roses. That didn’t last long and Phil Lewis become the lead singer and widely associated with the band as he helmed the band during their most successful years.

Acoustic Gypsy starts with a classic LA Guns song, “Crystal Eyes” and it’s lacking something. I don’t know if it’s simply that it’s the “wrong” voice singing it but it lacks depth, passion and Jizzy sounds bored. The song isn’t too far from the original, it’s just not the way it’s supposed to sound. I’m all for stripping down songs and making them more raw, pure, and often more powerful. That just never happened here. Even “Decide” and “Dreamtime” which are LA Guns songs from the one studio album Jizzy sang on sounds weak and meager without the heavy rock sounds. “Never Enough” and “The Ballad Of Jayne” are just downright depressing to listen to. As a big LA Guns fan, these were always my favorites. They weren’t slaughtered or mistreated; they just aren’t good.

And now let me address the crowd interaction and sound quality, which may have actually doomed this album for me before we even got a real good start. I’ve listened to this on three different sources and the sound is low, weak, and tinny in parts. I know it’s live and there are always challenges recording a live show but I’ve heard many, many live albums that were dramatically better than this in sound quality. Lastly, I know many people aren’t fans of crowd interaction, chitchat, etc in their live CDs; I am not one of those people. I don’t want drunk rambling but a few anecdotes never hurt anyone. Now, they may have very well been recorded and edited out, which if that’s the case, it’s a damn shame.

There are also two covers on Gypsy –  Boudleaux Bryant’s “Love Hurts” and Otis Redding’s “These Arms Of Mine.” I have nothing to say except I hope I never hear either of these versions again.

Acoustic Gypsy was a great idea and I love few things more than covers of great songs by bands I love and a great concert-feel record. Sadly, I got none of that happiness from this.