Southern soul by way of England 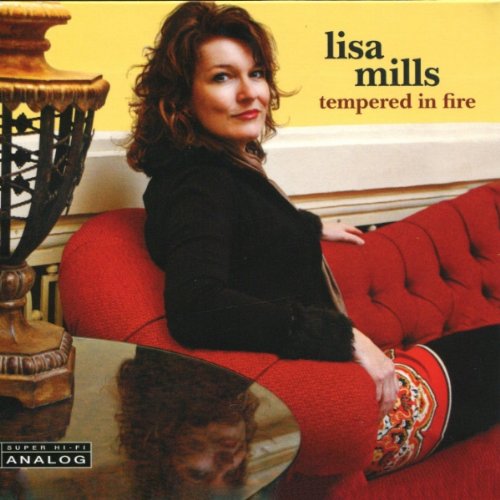 Lisa Mills is blessed. Blessed, that is, with a vocal abilities that seem to encompass and embody every cliché ever applied to a gruff, gargle-with-broken-glass yet velvety-smooth voice. It’s a remarkable instrument indeed, and she employs it magnificently on Tempered In Fire, her natural melisma and southern drawl at times reminiscent of Lucinda Williams, while elsewhere she exudes the fiery passion and gritty intensity of the late, great Otis Redding.

Mills is from Mississippi, but Tempered In Fire was recorded in Kent, England, and there’s a vaguely intercontinental feel to proceedings. Most of the songs lean heavily to southern soul, including covers of the old Wet Willie tune, “Keep On Smiling,” and Otis Redding’s immortal “These Arms Of Mine.” But the dominant instrument here is Andy Fairweather Low’s brooding guitar, and while he’s more than accomplished enough to handle the music – he has, after all, worked with a veritable who’s who of UK rock royalty (including touring and recording with Clapton and George Harrison) - there’s something somehow more complex, more cerebral, to his fretwork than typical of most southern soul.

That’s neither fault nor complaint, though – the band is uniformly excellent, with Mills herself contributing guitar as well, and there’s stellar support from bassist Ian Jennings and drummer Eric Heigle. It’s just an element in the overall sound, a sound that blends the earthy and organic with carefully considered and exquisitely understated elegance.

Most of the material here is shimmery and deliberate, starting with the slow burn of “Tennessee Tears” that sees Mills go from a hoarse whisper to a strangled shout with unerring ease. Upbeat fare includes George Borowski’s raucous, tough-as-nails “I’ll Never Fall In Love Again” and ”Why Do I Still Love You,” credited to the entire band. Borowski is also responsible for the moody “Blue Guitars Of Texas” and the disc’s closer, “Someone Very Close,” the one tune that sounds out-of-place; reminiscent of an 80’s rock tune by Bonnie Tyler (the vocal resemblance is uncanny), it’s a somewhat unfortunate ending to an otherwise consistent collection.

For the most part, though, it’s brooding ballads and passionate pleading, territory that suits Mills perfectly. Even “My Happy Song,” written by Mills with Hoy Lindsey, turns out to be a heartbreaker, and the aching intimacy of her delivery is riveting. Still, she’s more than ballsy enough to pull off the rockers with aplomb, swaggering through “Why Do I Still Love You?” and taking “Country Side Of Life” out in a blaze of passionate intensity. But Mills doesn’t simply rely on the power of those extraordinary pipes. She’s a fine and nuanced vocalist with an innate grasp of dynamics, and a subtlety that brings each song to vivid life – Mills sings from experience, not assumption, and it shows.

It’s taken a while for Mills to step up front for a collection under her own name. It’s about time – hers is a voice for the ages. Great stuff!