This time they came to Memphis rather than bringing Memphis to them... 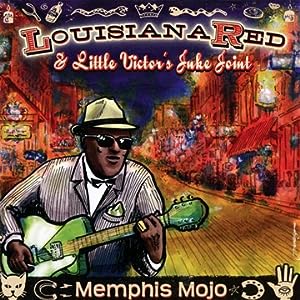 Louisiana Red and Little Victor's Juke Joint first paired up on Back To The Black Bayou, an album nominated for Best Traditional Blues Record at the 2010 Blues Music Awards. They brought Memphis to Europe where Red lives these days for that record, finding a studio with a '60s Auditronics mixing console formerly housed in Memphis' Stax Studio.

Fast forward to May 6, 2010 and Louisiana Red has just won two BMAs. He didn't win forBayou (his awards were for his collaboration with veteran pianist David Maxwell, You Got To Move) but he took to the stage with Victor's Juke Joint for one of the highlights of the evening.

Bob Corritore's liner notes for Memphis Mojo give away a secret a few of us who attended the BMAs have known for awhile: two days after the ceremony, Red, Victor, Corritore, and Maxwell holed up in a Memphis studio and began work on the sequel; they didn't need to bring Memphis to them this time and the magic of the first record carries over to this newest one, once again capturing raw, deep blues.

Vintage recording equipment and magical musical centers can add to the aura of a record but they guarantee nothing when it comes to the final project. I think of Louisiana Red in much the same way I think of John Lee Hooker. They are blues masters and not just anybody can sit in and play with them and have it turn out right. Bayou worked and Mojoworks because Red isn't relegated to being a guest on his own record. The musicians who took part in these sessions are seasoned players who understand where Red's blues come from and how to support him.

David Maxwell plays some great piano on "Why Don't You Come Home" and some modern producers might have shoved Red aside and pushed that up in the mix but that's not the approach here. Red and Victor's guitar interplay are pushed out front and Maxwell plays his ass off beneath.

You can't take your ears off Red's howling, distinctive cadence on "Boogie Woogie Boogie" and "Yolanda," but Maxwell and Corritore get in their licks on piano and harp without taking the spotlight from the man at the center of it all (although Bob is particularly feisty on "Yolanda").

Blind Lemon Jefferson's "See That My Grave Is Kept Clean" is the lone cover on this 12-song set, and Alex Pettersen's hypnotic drumming keys the staid reading of this blues classic until Red pierces gentle drone with a stinging slide lead.

It's rarely complementary to say two records are barely distinguishable from one another but in the case of Back To The Black Bayou and Memphis Mojo, it's the highest praise. Serious listeners can parse them and find the subtle differences a worthwhile way to spend your time but it's missing the point because we don't want them to change what they're doing when it's working this damn well. Little Victor, his Juke Joint, Corritore, and Maxwell didn't mess with success, they helped a master achieve it one more time.