Mastodon Finds The Groove With 'The Hunter'

The guys of Mastodon groove out on 'The Hunter' and show why they still are the ultimate wizards of psychedelic metal.

Groovy! I guess that’s not exactly the word you would expect in 2011 to sum up Mastodon’s latest release The Hunter, but after taking a couple of weeks to digest this album that’s the best way I can think to describe it. 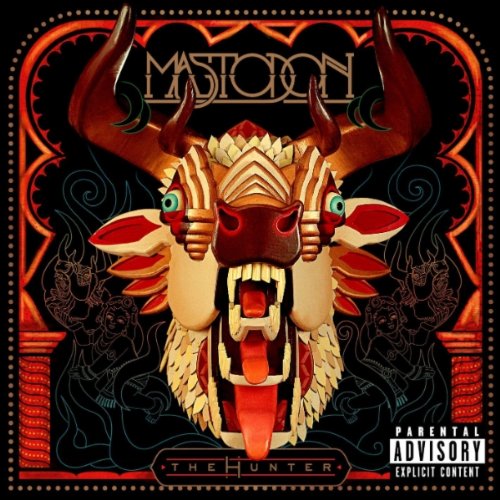 Before we get to the tunes I think an artwork discussion is in order. Mastodon has been as impressive as Tool when it comes to the physical presentation of their music. In fact, those are the only two bands that I still purchase physical copies of the releases because I don’t want to miss out on the complete artistic statement. Leviathan, Blood Mountain, and Crack the Skye set the bar very high for Mastodon’s packaging art, and The Hunter picks up where the others left off. As you can watch on the bonus DVD, the mythical beast on the cover actually is a wood sculpture and not simply a digital creation. That totally blew me away because I just assumed the detail and glare were computer generated until I watched footage of sculptor AJ Fosik carving the eyeball on a lathe. The artwork throughout the booklet contains close-up shots of the carving that have been manipulated into various psychedelic geometric shapes. Having not read anything about The Hunter until it arrived on my doorstep, I flipped through the booklet before listening and got the impression that I was about to hear a Leviatian-like epic about a mythical creature and his conquests. This is not the case, and I was a bit surprised through the first listen. The lyrics didn’t have a theme like Crack the Skye, but the artwork seemed to have a consistent theme.

Musically, I’ve struggled with what to say about this album for the last couple of weeks. Having first been introduced to Mastodon when they played The Nick in Birmingham in 2004 with Nebula and Clutch, I have been blown away by something in every release and in that first live encounter. From the originality of Remission and the brutality of Leviathan to the guitar Olympics of Blood Mountain and the “opening up” of the sound in Crack the Skye, this band has given me a “wow” moment for the past seven years.

I can admit that the first time I listened through The Hunter I was a bit disappointed because it doesn’t contain a single moment that jolted me like the others have. That being said, this album is not a disappointment by any stretch. In fact, it seems more like the guys have honed in on a consistent Mastodon sound and aren’t jumping around as much as they once did. Some of the earlier releases had the dreaded “Tool moment,” in which the odd meter seemed just a bit too close to something we’ve heard before. The only thing The Hunter brings to mind is Mastodon, which is a great thing. These guys have found a way to really make the music groove. I’ve found myself nodding my head more slowly to this album because the grooves overwhelm any “choppy” feeling you might get from Brann Dailor’s characteristically erratic breakneck drumming.

Instrumentally, the first three tracks are vintage Mastodon with a twist. Aside from the aforementioned grooving, Troy Sanders has greatly improved his vocal delivery over the last couple of albums. Instead of screams that you might expect to hear if the “hunter” on the cover is in full chase, Sanders opts for an intense singing voice that seems to float over the musical mayhem and enforce the groove. When Brent Hinds steps in for dual vocal work, the effect creates a psychedelic metal sound like no other. As always, Bill Kelliher’s guitar work blends with Hinds to create a swirling effect. By the time we’ve reached track four, “Stargasm,” the train has left the tracks completely and the guys have opened up the sound much like they did on Crack the Skye. After three songs of rocking out, the buzz has kicked in and the journey begins.

After a relatively mellow title track sung by Hinds, “Dry Bone Valley” hits us at track eight and the groove has taken over completely, with Brann’s cleanly-sung vocals bringing to mind a combination of Ozzy and Josh Homme. The next track, “Thickening,” begins with a psychedelic intro much like something you might hear on Leviathan, then the groove strikes back. “Creature Lives” may be my favorite song on The Hunter, but it sounds less like Mastodon than anything on the album. Next, though, boys and girls, comes the beast of old wearing a new coat. “Spectrelight,” with Scott Kelly from Neurosis singing the verses, is classic Mastodon and could be on any album they’ve released. I’m not surprised that they released a video for this song first because it really doesn’t tip you off to the new sound on the rest of the album.

The final two tracks get back to the dual vocals and groove, but “Bedazzled Fingernails” does have more of a Blood Mountain feel with the odd beat, chicken pickin’ riffs, and intense chorus. “The Sparrow” is a psychedelic wonderland, with a very slow feel, acoustic guitar arpeggios, and altered-vocal delivery. The verses ramp up into a heavy instrumental chorus much like “Ole Nessie” from Remission, then an epic guitar solo brings the listener back down into the verse. No lyrics are printed for this song, but instead the phrase “Pursue happiness with diligence” is written. The album ends with that phrase sung alone after the music has faded. Indeed.

To sum up my take on Mastodon’s fifth full-length release, The Hunter, the most obvious thing to say is that musically it is a mixture of the last three releases. That’s too easy, though, and doesn’t accurately reflect the nuance of this band’s new sound. Yes, they’ve found the groove and don’t want to let go. Also, they’ve decided to tone down the screaming for a style of intense singing, which I can really get into. That allows me to listen to Mastodon in the presence of my wife, and I couldn’t do that very much until they released Crack the Skye. Mastodon is the best kind of band in the way they keep challenging me as a listener with each release. If I wanted the same old crap I would listen to the radio or watch television, or simply listen to my old music collection.

What I’m trying to say is that, even though The Hunter didn’t give me an instant “wow” the first time I listened, I’ve been saying “wow” the more I listen to it because I’m being more and more impressed. And, by the way, the groove has done nothing to move me from the opinion that these guys are the psychedelic wizards of heavy music. Eat a few mushrooms or light up your favorite herb then get back to me. Or better yet, find me at the show when they (hopefully) come through Birmingham again and I’m sure you will agree that The Hunter only solidifies the Mastodon experience as the best mind voyage out there today.