Morgan Davis – Drive My Blues Away 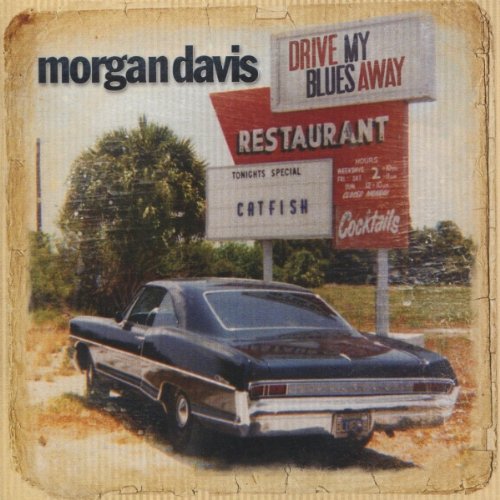 Listening to Morgan Davis' new disc, Drive My Blues Away, it helps to know a bit about the man behind the music. Something of an unassuming legend for his role in the nascent Canadian blues scene back when Canadian music first began to have an identity, he was there when the 'Toronto sound' was forged. And in person he's pleasant, thoughtful, witty, and intellectually curious, with a generous and warm spirit. In short, a really nice guy.

Nice guys, typically, don't make compelling blues albums. Blues, by design and by definition, isn't 'nice' music. At their best, the blues have lots of rough edges, and a vague air of dark, dangerous menace – music by and for adults with nothing left to lose. Yet it can work, and Davis, through sheer artistry and a relaxed approach that's unforced and thoroughly natural, has crafted a genuinely likeable disc.

That's not to imply perfection - there are some weak moments to be found. Davis can be a bit smug on occasion – one of the perils of contentment - and songs like "Anticipation" and "The Money Men" are trite and ultimately uninspiring, however well performed. But they pass by pleasantly enough, and there are more than enough gems to balance things out. Opening number “Sure As You Live” rides a simple but effectively hypnotic groove while dispensing its wisdom, and “Thank You Mr. Reed” proves a delight, a lazy Jimmy Reed-style shuffle that name-checks several (actually, 27!) of Reed’s song titles for its lyrics. Both “Re-Break My Heart” and “Love Puzzle” are clever without getting cutesy, and the title track is a fine road song. Covers include one each from Lightnin’ Hopkins (the relatively rare “Arlene”), Rice Miller (A.K.A. the first Sonny Boy Williamson), and Skip James (“Look Down The Road,” featuring Davis on cigar-box guitar), and a pair from Robert Johnson  - “When You Got A Good Friend,” and a version of “Ramblin’ On My Mind” recorded in Davis’ room back in 1973, that closes the disc.

Old friend and band mate Colin Linden (who was on Davis’ very first recording back in ’81) contributes guitar to a remake of “Happy Song,” a tune that appeared on that debut. There’s a bit of harmonica courtesy of Seymour Townes, and a touch of percussion on “Sure As You Live,” but for the most part it’s just Davis and his various guitars. His voice isn’t particularly remarkable, but he’s astute enough not to try too hard, and the occasional use of distortion adds a bit of variety and  depth. He’s a masterful picker, but again, never tries to impress; he simply plays very well indeed, leaving the dazzling fretwork to the kids.

It’s easy enough for collections like this to slide under the radar. In a crowded world, those who shout loudest get noticed first, and Davis is far too laid-back to clamor for attention. But like those old jeans that you wouldn’t wear to a formal occasion, but that feel more comfortable and cozy than anything else in your wardrobe, there’s a time and place for relaxed, easy-going music performed with unerring skill and genuine warmth. Listening to Davis is like listening to a good friend  – can that ever be a bad thing?