Redman, Parks, Harland, and Penman hope this debut is only the beginning and so do I... 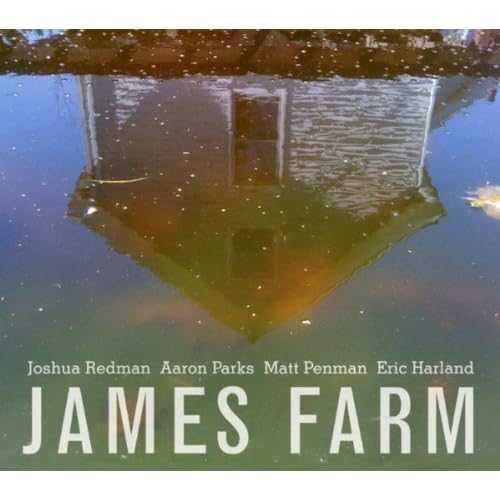 I don't speak "jazz" and for years I let that stand between me and it. Jazz was music for smart people who went beyond generic community college music appreciation courses where you learned what year Duke Ellington and Louis Armstrong were born. Every music has its own language but some idioms rely more heavily on their native vocabulary, structures, and concepts than others. Jazz appealed to me but it felt impenetrable. Where do you start? At the beginning? When are you ready for Miles Davis? Do you have to pass a test to buy John Coltrane?

I tried to dabble and even bought a couple jazz CDs but somewhere along the way it felt like too much work and I let it fall by the wayside, opting to remain the comfort zone of the various derivations of rock and roll. During my casual jazz flirtation, I came across a review of Joshua Redman's Freedom In The Groove. I think it was actually reviewed in Rolling Stone, if you can believe that. I was intrigued. I wanted to hear "good" jazz. I -- and this is funny -- played saxophone (poorly) in the band for three years. The guy had a good name. We had so much in common! I bought a copy of the CD. I listened to it. I told myself I liked it without really knowing what was going on. I later traded it in at a used CD store where it's entirely possible I bought something atrocious. I never forgot the name (how could I?) but made no plans to resume my private jazz study.

Fast forward a decade or so later; I was re-introduced to jazz through the prism of rock and roll and my interest was rekindled. Former Screaming Trees drummer Barrett Martin left his rock past behind and pursued a path of world-jazz music and I loved it. I wasn't trying to talk myself into liking it. I wasn't worried about getting a seat at the cool kids table. I was listening to this music -- unlike anything in my collection at the time -- and something clicked for me. Slowly, I began adding records by Dave Brubeck, Miles Davis, John Coltrane, and Pat Metheny. I still don't speak jazz but I listened to these records and found things I loved in each of them. I have no idea how Kind Of Blue does what it does to me and I don't care. I'm not opposed to learning its secrets but I don't need to know them to tell you it's a beautiful and inspired.

I was ready to reacquaint myself with Redman when I learned of James Farm, his new collaboration with pianist Aaron Parks, bassist Matt Penman, and drummer Eric Harland. I wasn't familiar with these three but I read a short bio about this band that began performing live before knocking out their debut record in four days. A voice in my head -- one of many, I might add -- told me I needed to hear this for myself. It is a mild upset but this proved to be very good advice.

Parks' enigmatic piano intro to the album's initial track "Coax" hooked me immediately. When Redman and Harland join, it becomes a fascinating discussion, a mystery. I don't know if I'll ever solve the riddle and I'm not sure James Farm does either. Redman is plays frantically as the rest of the musicians return the song to where it began. A lot of ground is covered but where does it leave us? Ready to return to the beginning, to renew and continue the exchange.

That spirit of mystery is again found in "Chronos." Parks piano is again central to the uneasy, off-balance atmosphere, punctuated by exciting drumming from Harland from the midpoint to the song's end. Parks wrote this track and bassist Penman says it evokes The Rime of The Ancient Mariner to him. That's not where it takes me but the beauty of these two songs and several others on the record is that the questions and journey are just as important as the answers. The point is to go, to be transported. I may not speak their language but I feel able to follow the conversation all the same.

Penman's "1981" features fantastic playing from Redman and Parks adds a little seasoning to this tenor-piano-bass-drum quartet by adding a brief flourish of celeste, an instrument similar in sound to glockenspiel and vibraphones, as well as Prophet5 (which he also plays on "Coax" and "Chronos").

Redman, Parks, Harland, and Penman hope this debut is only the beginning and so do I, for them and for me. James Farm is one of my favorite discoveries to this point in 2011 and another step in my own musical education.