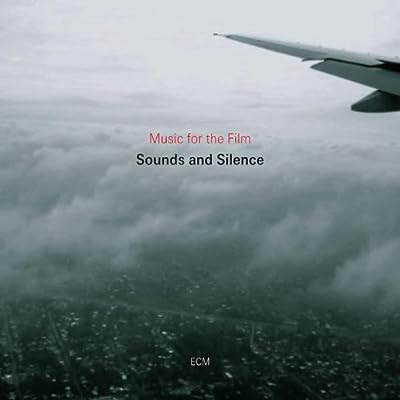 The recent DVD issue of Sounds And Silence: Travels With Manfred Eicher has become a celebrated event among fans of Eicher and his label ECM Records. In the film we find the normally reclusive Eicher interacting with label artists such Arvo Part, Marilyn Mazur, and Dino Saluzzi, among many others. In each segment we see Mr. Eicher consulting with the mucians in an attempt to find the perfect sound. Whether they are preparing for a perfomance, or are in the studio recording, Eicher’s input is always regarded as a necessary adjunct to the proceedings.

Like the film, the soundtrack begins with the piano of Keith Jarret, performing “Reading of the Sacred Book” by G.I. Gurdjieff. This short scene is devoted to Eicher, stitting and contemplating something. The look on his fact is one we well get to know quite well over the course of the film. The music of Gurdjieff gives way next to that of Arvo Part, and his “Fur Lennart in memoriam, featuring the Tallin Chamber Orchestra, conducted by Tonu Kaljuste.

In Sounds And Silence, we see the musicians in the midst of performing, or at least rehearsing. Thankfully the soundtrack spares us all of that, most of the tracks on Music For The Film Sounds And Silence are the fully completed, studio takes. There is one exception however. The two Eleni Karauindrou pieces “Farewell Theme,” and “To Vals Tou Camou” were recorded live in front of a Frankfort audience. In addition to the orchestra, label-mates Jan Garbarek and Kim Kashkashkian are guests.

With regards to Manfred Eicher, and the film itself, the subject never strays far from the main topic, which of course is the music itself. To that end, Music For The Fim can be looked upon as something of an ECM sampler. It has always been difficult to hear ECM records being played on the radio. But Eicher’s team have skirted this issue by presenting each release as an integral part of the whole. From the album covers to the interior packaging, and to the recording process utilized for the sounds themselves, ECM Records have built one of the key brands in the music industry.

With literally thousands of recordings having been issued by the label over the years, it can be a little off-putting for new fans to know where to step in. With Music For The Film Sounds And Silence, we are exposed to a wide variety of the voices. and there is inspiration to be found in them all. In the film, each of the tracks are only momentarily heard, to provide context to the narrative. With that in mind, I feel that this soundtrack is a must for fans. It also works perfectly as a chance to listen to a wide variety of different artists, all presented in a manner completely outside of their respective comfort zones.