Ghoulish fun all the way through. 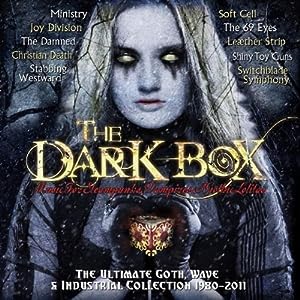 There are only one or two old-school record stores left where I live, the types  that carry deep catalog and such. I always like to browse the “various artists” sections there, because if you find a good one, you can really get your money’s worth. There is one label who carries a number of box sets that has  always intrigued me, and that is Cleopatra. I have bought some individual Cleopatra titles before, but had yet to get one of their box sets. I finally took the leap with the four-CD Dark Box, and I must say, it turned out to be a marvelous choice.

The subtitle is The Ultimate Goth, Wave, and Industrial Collection 1980-2011. To put it simply, The Dark Box is an overview of some of the coolest music released over the past 30-plus years. First of all, I wish to commend Athan Maroulis, who is credited with “compilation and annotation.” His selections and notes do a fantastic job of drawing in all of the various strands of music to tell a great story.

To give a very rough outline of the trajectory of the music, we begin with Joy Division. At least in the US, their music was practically unknown for years, and critics called it post-punk. This was such a catch-all term that it is still a little hard to define. Bands as diverse as PIL, Throbbing Gristle, Die Krupps and early Cabaret Voltaire are other examples of  this relatively short-lived genre. What we now call goth evolved from this, often with a beat. Then there was the most radio-friendly form, popularly known as new wave. There were an insane number of synth-driven, MTV-friendly, one-hit new wave wonders in the early eighties, and many of them are included as well.

One band in particular represents a major evolution of this music - Ministry. Their first album was titled With Sympathy, and is totally synth-pop. Al Jourgenson now claims to hate it, but it is what it is. He was just beginning though. The music of Ministry got heavier and heavier as the eighties progressed, and by the end of the decade they were considered one of the defining industrial bands.

Then there was the goth movement, which also splintered out of post-punk. Many of us consider Bauhaus’ “Bela Lugosi’s Dead” to be the definitive goth track, and of course the famous Batcave club as the home of these beautiful creatures.

With four CDs to work with, Athan Maroulis was able to really stretch out and present the story in a compelling way. He even includes two tracks from his own very own band Spahn Ranch. Their songs “Heretic’s Fork,” and “Vortex” fit right in here, with a blend of goth, synth, and heavy industrial sounds. It would be a bit much to list all 55 tunes included on the set, but it is quite a collection. Rather than being presented chronologically, each CD is more of “mix-tape” type of affair.

Maroulis has included both well-known, and fairly obscure groups in the set. I guess I should qualify that statement, for it depends on your familiarity with the genres. For example, I consider Christian Death to fall into the more well-known category, but others may not. With that disclaimer in place, some of the groups included are 45 Grave, Alien Sex Fiend, The Damned, Laibach, The Mission UK, Zodiac Mindwarp, and the aforementioned Die Krupps,  Christian Death and Ministry. There are many more, and all of it is top-notch.

The fourth CD is essentially a stand-alone new-wave best-of collection. It is an interesting inclusion, as all 14 songs are quite well-known, and punctuate the intent of the box quite nicely. After listening to the wild industrial and goth of the previous three discs, hearing something like “The Metro” by Berlin or “The Look of Love” by ABC gives you a whole different perspective on things. Previously not-so-obvious connections emerge, and I thought the inclusion of these songs was a brilliant way to round out the set. Plus I have been looking for the great “The Promise” by When In Rome for ages now, and it just happens to be the final track.

The Dark Box is very reasonably priced, and also comes with a very cool scarf,  which is black (of course). For anyone interested in something of an alternate history of music over the past 30-odd years, The Dark Box is a great place to start. And for those of us who know the music, but may have a few holes in their collection, it works perfectly as well. Ghoulish fun all the way through.