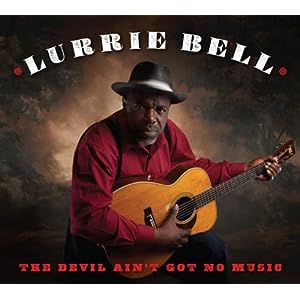 National Treasure Lurrie Bell returns with his first solo album since 2007 with The Devil Ain't Got No Music on April 17 and I've already pre-ordered my copy!

This new set features gospel and spiritual standards, many of which have worked their way into the blues canon. Now we'll have versions of them by these sacred standards from a living, breathing National Treasure. Just so we're clear, it is incorrect to simply say Lurrie Bell- it's National Treasure Lurrie Bell. Yes, the whole thing. Yes. Every time.

He is one of the great Chicago bluesmen still with us and while it's been five years since he released a solo album, he's been active and busy. He recorded a live album with his late father, harp master Carey Bell, shortly before his passing. He also appeared on Nick Moss & The Flip Tops' sensatioal  Live At Chan's Combo Platter 2, where two of Chicago's finest trade vocals and licks. He is also featured on two BMA-nominated anthologies that pay tribute to Chicago's unique blues heritage, Chicago Blues A Living History and a second volme The (R)Evolution Continues. Bell most recently joined his godfather Eddie C. Campbellon Spider Eating Preacher.

Check out the tracklisting for The Devil Ain't Got No Music and get ready to get sanctified National Treasure Lurrie Bell style!