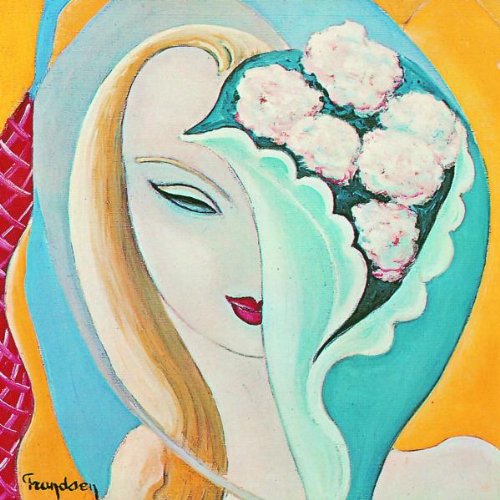 Derek & The Dominos' Layla & Other Assorted Love Songs turns 40 this year and Eric Clapton is overseeing a 40th Anniversary Edition of this vital classic. As has become the way of things in the recording industry it will be offered to fans in multiple packages, and yes, I'll be going all in on one of these when they are released March 29.

The first package for the 40th Anniversary is the single-disc, 14-track album itself which has been newly remastered. Let's pause here for a moment. The Layla record has been issued multiple times in the CD era and there are multiple masters. The announcement the album has been newly remastered leads me to believe it has been remastered yet again, updating the version released when the majority of Clapton's catalog was reissued, but we don't have details on who has mastered this set or when.

The deluxe edition offers up a second disc of rarities and previously unreleased music. Among them are six performances from what would have been the follow up to Layla, all have which have been remixed by original session engineer Andy Johns. One of those songs is "Got To Get Better In A Little While," which appears in two versions. The first version is a jam, the second has been tweaked and finished by keyboardist/vocalist Bobby Whitlock. All four songs from the group's appearance on Johnny Cash's TV show are also included as is the band's first single produced by Phil Spector. That A-side/B-side – "Tell the Truth" and "Roll It Over" --  was only briefly available but is now being re-released. The deluxe edition also includes the original album on 2 vinyl LPs remastered directly from the original master session reels, featuring slightly alternate mixes of some songs.

Now we come to the Super Deluxe edition, which includes the two CDs and the two vinyl LPs but adds two more CDs, some deluxe packaging, and a DVD. The two additional two CDs fold in the Derek and the Dominos: In Concert, remastered and expanded to include additional performances from the Fillmore East of "Mean Old World," "Nobody Loves You When You're Down And Out," and "Key To The Highway."

With all that material, there are the following seven purchase options:

So, what's an obsessive to do? All I knew of Layla & Other Assorted Love Songs was the classic title track as recently as just a couple years ago. I went through a phase of listening to some Clapton solo albums as well as a couple compilations in my collection, learned of a couple more songs from the Layla album, and realized I didn't actually own it. Amazon.com came to my rescue and I pretty well flipped for it. It's a blues-rock masterpiece.

My allowance will play a role in my decision but I'm leaning towards the Super Deluxe edition. It includes all the music, throws in the vinyl for the day I get my turntable properly integrated to my home listening setup, and gives me the DVD and hardcover book.