The Black Keys' media blitz is paying off in a big, noticeable way.  The Akron, Ohio duo recently scored six Grammy nominations and now their album has been certified Gold (sales of more than 500,000 copies) and they jolt to #2 at the iTunes Music Store. 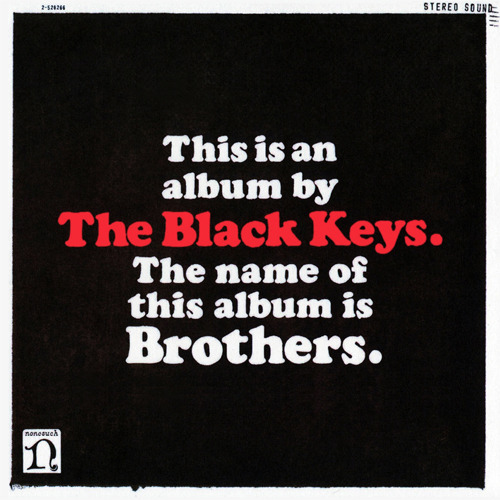 I haven't been on the Keys' bandwagon since the beginning but I go back a few years to the Rubber Factory and Magic Potion days.  I love these guys and I'm thrilled to see their music reaching a wider audience as they experiment and expand their sound.  I still love the early, lo-fi records and would be happy to hear them return to that for a future album but Brothers is a wonderful work and one of the best releases of 2010.

We have the Country Strong and TRON: Legacy soundtracks placed highly on the albums chart, flanking The Black Keys.  There are two volumes of the Country Strong soundtrack on the chart this week.  I hadn't even heard of this movie until I went and looked it up on Amazon and now I see that in addition to having songs by some of country music's biggest names, this is another step Gwyneth Paltrow's attempt at a music career.  I guess.  I've heard mixed reviews on her as a vocalist.  I simply don't care.

The singles chart doesn't have much shakeup from last week with the same beat-driven songs that were hot last week carrying over to this week.