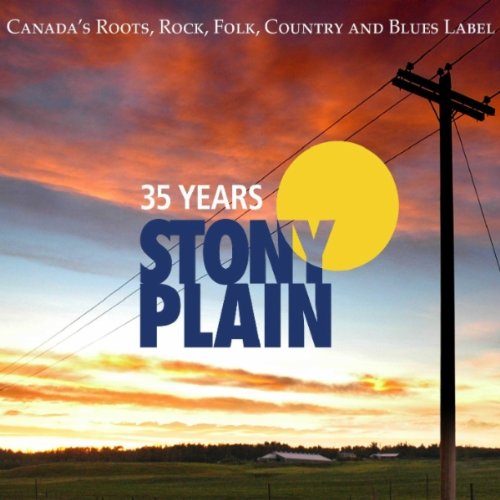 35 Years Of Stony Plain is more than a compilation of music that has been distributed by the Canadian blues/roots independent label. It goes beyond merely chronicling the artists who have crossed their path to make a record here and there. It tells a story and presents the music in a context for listeners who may not have ever paid attention to the name of the label on the spine of a CD. It illustrates all that is magic about maverick artists making music on their terms and an independent label willing to not only allow it but in some cases encourage it.

There are 41 songs spread across 2 CDs in this package (as well as a bonus DVD). The discs are broken down thematically, with an acknowledgement that great roots music like this can't often be easily pigeonholed. The first disc is devoted to singer/songwriters and roots artists that have recorded with SP while the second is devoted to the label's enduring love of blues, R&B, and swing.

The blues disc registered stronger with me than the singer/songwriter set but they're both excellent. That first disc has cuts from Steve Earle and Emmylou Harris, and they're both excellent. The Harris cut is a live performance of "Wheels," written by former Byrds Gram Parsons and Chris Hillman. Asleep At The Wheel's "That's Your Red Wagon" is another standout track on that first disc as is Harry Manx and Kevin Breit's "Looking For A Brand New World."

The blues disc has the fingerprints of the amazing Duke Robillard all over it. He has recorded a dozen albums for the label and also served as a producer and almost an unofficial talent scout. "Stomp The Blues Tonight" is the title track from his Blues Music Award-winning album. He also served as producer for the cuts by Chicago great Billy Boy Arnold and piano legend Jay McShann. Robillard's friend Ronnie Earl, another of the label's veteran artists, is also here. "Miracle" is part of a suite of songs that represents the heart of his career-best record Spread The Love, released last year. Joe Louis Walker won Album Of The Year in 2010 for Between A Rock And The Blues, and that album is represented here by "Black Widow Spider." Sonny Rhoades won his first BMA this year and his "Honey Do Woman" is a great representation of what makes this steel guitar master great.

Most of the 41 songs were released on Stony Plain albums as you would expect but there are a few rarities seeing their first ever release from the "vaults," most notable of these are four previously unreleased songs from slide guitar master Robert Nighthawk.

The bonus DVD has some nice goodies. The package wouldn't feel slight without it but it's interesting to hear from label founder Holger Petersen as he tells a few stories about the labels past, present, and outlook for the future. There are also video clips from Earl, Robillard, Long John Baldry, Ian Tyson, and more. You may not watch it repeatedly but it's worth checking out a time or two. 35 Years of Stony Plain is more than a stuffy biography or a label vanity project, it's a love letter to music lovers all around the world.

CD 1 Singers, Songwriters And Much, Much, More…