Review: A Fine Frenzy - Bomb In A Birdcage 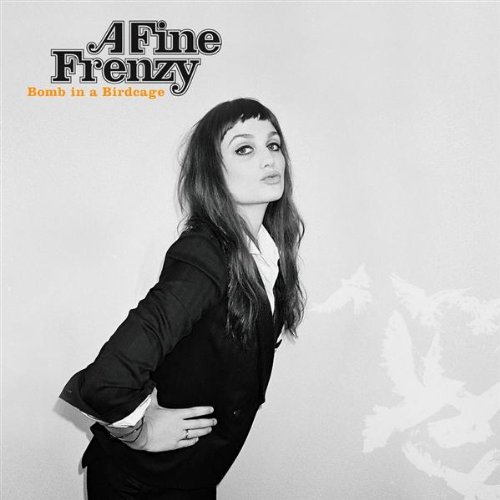 I don't know how many reviews I've written in which I've ripped a band for repeating themselves but I've done it more than once.  Artists are supposed to grow and develop, right? They're supposed to spread their wings and progress, expand, and refine. I know this to be true. I've insisted upon it. I've praised bands who do it well and exalted them above all others.

One Cell in the Sea, AFF's 2007 debut, isn't perfect from a critical standpoint but it struck a perfect chord with me. I bonded with that record. I didn't know it at the time but I needed that record. One Cell in the Sea healed places I didn't know existed within me. It was soft and soothing and lush and pretty. It was ethereal and beautiful and filled with the awe and wonder of an artist at the dawn of her career. One Cell introduced us to singer/songwriter Alison Sudol and her impossibly gorgeous voice.

If there were flaws on One Cell — something I don't easily concede — it would be that it was a little too long and a little too static. Sudol found a formula and stayed true to it over the course of the record. The formula was perfect for her best ideas and simply pleasant for those of lesser quality.

So what did A Fine Frenzy do with the follow up, Bomb In A Birdcage? The record is three songs shorter and the sound has clearly broadened and diversified. So why was I so damn depressed? Call it the peril of perfection. I wanted a sequel, not a follow-up, and I didn't get my wish. I had to come to terms with that and let it go. I was finally able to hear Bomb rather than searching for One Cell and, well, I quite like it.

Album opener "Wouldn't Do" has some of the whimsy occasionally heard on Cell, but acoustic guitar replaces piano in the musical foreground. It's also the song that provides the title of the record in its lyrics. "New Heights" is far more rhythmically advanced than anything on Cell. Piano and keyboards return to the fore beneath Sudol's pretty, double-tracked vocals. Like "Wouldn't Do," tempo is pushed up a notch. "New Heights" is among the best of the non-ballads.

"World Without" is another of the more uptempo songs – comparatively speaking – that works well. "Wouldn't" and "World" are both layered, but not in the same way as songs from Cell were. Cell was layered to be lush and pretty while the effect on Bomb is more forceful. "Stood Up" is probably the best example of that and it's among the better songs on the album. "Happier" is almost weird enough to fit on Fiona Apple's bizarre-yet-appealing second album When The Pawn... Both AFF records border on being overproduced, but in different ways and to different effect.

I don't think anything will ever save "Electric Twist" for me. What sounds like fun to some seems to be a waste of precious record space. Sudol's talents are better spent elsewhere. "Twist" has a bit of new wave sound and is probably intended to be tongue-in-cheek.  There have to be better ways to remind audiences she has a sense of humor.

Bomb is a well-crafted record that provides evidence of an evolving artist. Tempos are varied and new sounds are introduced to the mix put forth on the debut. Sudol still has a beautiful and expressive voice and regardless of what she's singing, her ability to sing is still what stands out most. If this is the first step towards a new direction it is bold and assured, but it makes me sad to think the terrain of One Cell In The Sea has been abandoned forever. Bomb In A Birdcage may be the better record and I like it and it's very, very good. I just don't care.