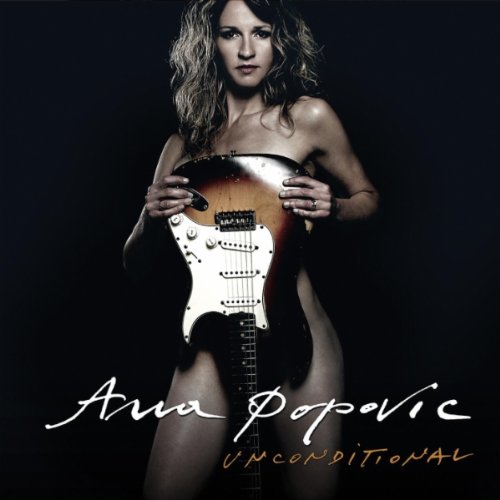 The bonds of Holy Matrimony demand this be the final time I post the cover art of Ana Popovic's Unconditional on this web site, so take a good long look, dear readers. You're on your own from here on out. I'm sure Ms. Popovic meant no harm to my happy, rewarding, loving, 11-year marriage and would appreciate it if I'd stop talking about the cover of her record but I'm cracking myself up and anyone who knows me will vouch that I can't let go of anything I think is a good joke. You're going to have to buy a copy of the album if you want to see it again and after having listened to the record a few times, that's really not such a bad idea.

Unconditional is more than just a title of record, it's a mission statement and state of being according to the brief liner notes Popovic composed. It's personal to her and that comes across in her having written or co-written the majority of the 12-song record. She remains at the center of the album throughout but gets some support from award-winning harp master Jason Ricci ("Count Me In" and a guest slide solo from veteran guitarist Sonny Landreth ("Slideshow").

Her brand of blues/roots isn't innovative but it works for her. She's a gifted guitarist and her instincts as a vocalist are usually right, knowing when to reach for a little grit and when to take something off, playing it a little smoother as she does on the album's title track.

"Fearless" is a power blues with some fiery leadwork and "Count Me In" has the skeleton of a traditional blues but it's amped up and both Popovic and Ricci give ferocious instrumental performances. "Slideshow" is an instrumental track allowing she and Landreth to cut heads and flash their slide licks. What's refreshing is the restraint these two lead players show. The hot licks are plentiful but it doesn't become excessive or indulgent and neither sounds like they're trying to show up the other.

Much of the record strikes the right balance but there are a few places on the disc where she misses, sometimes a little ("Summer Rain") and sometimes a lot ("Business As Usual"). I don't want to go *Goldilocks & The Three Bears* but sometimes she is a little too hot and others a little too cool.

Unconditional has enough moments that are just right to recommend it despite the occasional inconsistencies in the material or the arrangements. Take one last look at the album cover and then get a copy for yourself (Hint to married fellas: you can fold the CD book a certain way and stay out of trouble; it's just one more reason to opt for the disc over the digital).