"You can come back but you can't come back all the way..." 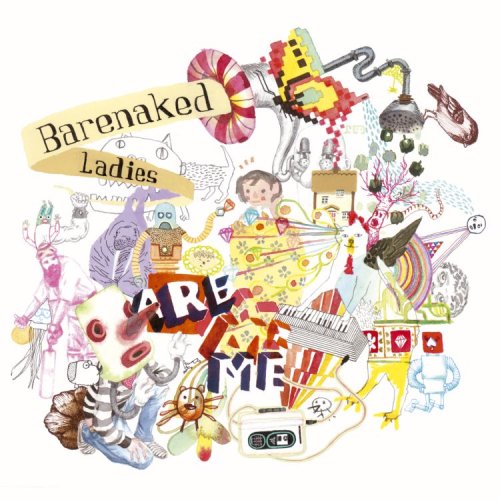 It is tempting to say our Barenaked Ladies are growing up before our very ears, but is it true?  Maybe.

The clown princes of pranks and shticks always had a serious side to them.  Since 1992's Gordon, fans and critics have had to wrestle with the question of whether BNL are jokesters with a serious side or serious musicians with a good sense of humor.  They have probably been both throughout their career.  With Everything to Everyone and now Barenaked Ladies are Me it is becoming increasingly apparent they would like to be thought of as the latter, not the former.

Few bands make their best albums when they enter the second decade of their career.  BNL have entered that comfortable place where they can make comfortable music to please themselves and the fans they have attracted along the way.  They are not likely to make any bold, artistic statements.  They are a veteran act and the changes they make are likely to be more subtle than spectacular.  On...Are Me, Jim Creegan and Kevin Hearn each take a turn singing lead and different instruments are added to the sonic palette.  After 13 songs, it still sounds like a Barenaked Ladies album with a new wrinkle or two.

I can no longer listen to an album without thinking of the review I hope to write.  The first time I heard "The Sound of Your Voice," I was sitting in the McDonalds drive-thru.  Yeah, I know, no accounting for taste.  As I was listening to the song, I went rummaging for a pen and a piece of scrap paper.  I had to jot down the first thought that went through my head as I listened to it:  Queen.  "Somebody to Love."

I wrote it down because my memory is so bad.  I need not have bothered this time.  The two songs are inextricably linked in my mind now.  I have even taken to signing "Somebody to Love" at different points during the song.  "The Sound of Your Voice" is not derivative, it is inspired.  "The Sound of Your Voice" is not a re-write of the Queen classic but the two songs are cousins.

Along with the note about Queen and "Somebody to Love," I made one other notation about one other song while sitting in the drive thru:  "Easy" reminds me of "Solsbury Hill" by Peter Gabriel. And it still does.  "Easy" fits under the heading of "solid album track."  There is nothing particularly noteworthy about it in a positive or negative sense.  It is a good song.  Barenaked Ladies fans will like it.  Fans of basic, acoustic-based rock will probably like it.  It is hard for me to imagine this song eliciting much passion- it's not that kind of song.

I was not terribly impressed with "Bank Job" the first time I heard it.  It is now my favorite song on the album.  Should the lyrics to "Bank Job" be taken at face value?  Is this really the tale of a botched bank robbery?  After all, they do make a great use of guitar creating a brief siren sound near the end of the song when the robbers are being carted off by the police.  The song works on that level; the story makes sense.  It could be that simple.

It could also be a metaphor for something more.  I am almost always wrong when I try to do song interpretation and I think most people who try wind up making asses of themselves.  I am not going down with them.  Still, in the midst of the narrative stuck between the wisecracks are some poignant lines ("It's not what you're sure of/it's what you don't know" and "I'm all for compassion/just not on my dime").  Musically, the song opens with a whimsical keyboard that sounds like bad video game music.  As the song progresses, Ed Robertson's vocal and the music takes on more weight.  Is that just songcraft or is it a clue that the song runs deeper than the surface?

The sleepy "Adrift" is a wonderful song that is poorly sequenced.  The song is lovely but is perhaps too understated to open the record.  Setting that aside, it combines clever wordplay ("The onion rings/the phone makes me cry") with a brilliant musical background filled with acoustic guitar, banjo, mellotron, and viola.  Hearn and Jim blend pleasing harmonies with Ed Robertson's lead vocal.

Bob Dylan said, "You can always come back, but you can't come back all the way."  Everything to Everyone disappointed me. Barenaked Ladies Are Me is better than Everything and has more songs I like than don't but this is not their best.  At this point in their career there is nothing wrong with turning in a solid album of simple pleasures and solid craft.  That defines Barenaked Ladies Are Me.