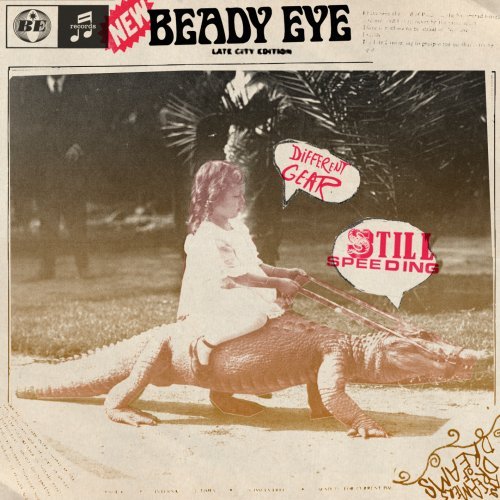 Let's dispense with the obvious and take a moment to make our "not Oasis" jokes about Beady Eye. Oasis frontman Liam Gallagher has formed a new band after the breakup of his previous one and he's continuing forward with Gem Archer and Andy Bell, two lads who were part of Oasis' final lineup. Drummer Chris Sharrock has joined them and they wasted no time lining up studio time, planning gigs, and releasing their debut Different Gear, Still Speeding with assistance from noted producer Steve Lilywhite.

It's relevant to address the push-pull dynamic between Liam and his older brother, Noel, who was the exclusive songwriter and occasional vocalist on Oasis' first three records and remained the primary songwriter through the end of the band's run. It was a matter of discussion among fans and numerous sober and drunken rows between the brothers about who actually drove the band's sound. Would Liam make a huge departure in sound and style without his brother to antagonize? Of course not!

The most common observations about Oasis came down to the penchant for blatantly borrowing/ripping off other bands and the two brothers squabbling with one another. Originality isn't something Liam has ever put an obvious premium on and so Different Gear sounds Oasis-like or Oasis-lite.

To hear his brother Noel put it, Liam's early attempts at songwriting were "shocking." Our first taste of little brother's wordplay came on "Little James" from Standing On The Shoulder of Giants and Noel pretty much had that one pegged; it's a dimension of awful that can't be easily described. In time, Liam got much better and was sometimes even quite good beginning on Heathen Chemistry and continuing through Don't Believe The Truth and Dig Out Your Soul. Maybe he learned how to re-write classic tunes from his brother or maybe that ability is in the genes because you know he's going to do it. They named a song "Beatles And Stones," for crying out loud!

"The Roller" was better when it was "Instant Karma" but if you take your nose out of the air and listen you realize many of the things that made "Instant Karma" great and fun to listen to are present here. That was really the Oasis secret. Of course they were ripping off other bands, but they did it well and when they were through, there was an actual song to sing. They may not have left the original better than they found it but when they took something they did something with it and that's more than you can say for hundreds of other bands who have worn their influences just a little too obviously.

"Four Letter Word" sounds like an outtake from Oasis' final studio album Dig Out Your Soul, complete with the psychedelic keyboards, huge slabs of vintage '60s-sounding guitars, and Liam's sneer at full throttle. Never one for subtlety, it can't be an accident Liam repeats the refrain "nothing lasts forever" on the first song on the first post-Oasis record. It's dramatic, epic, and swirling, sounding much like the kind of song you'd hear during an action sequence in a movie.

"Bring The Light" is interesting not in the sense of being a new idea but being a new idea for a Liam Gallagher-led album. Built around insistent, pounding piano that has the force of a Jerry Lee Lewis but without the dazzling fills, Gallagher presides over a skiffle-n-soul rocker complete with female backing vocalists extolling him to "baby come on." You've heard songs like this and heard them better but it's interesting to hear Gallagher's voice in this setting.

"Wind Up Dream" is a droning rocker and "Three Ring Circus" echoes with chiming guitar. They both sport solid hooks and add to the number of songs that work on Different Gear. There is more here than I expected but the album has the problems I anticipated it would. It falls short on ideas, particularly in the lyrics department and most obviously on slower, softer tracks.

Liam isn't a strong lyricist and neither are Archer or Bell based on their songwriting contributions on the final Oasis albums. The sincerity of their effort on most songs is evident and there are moments it all works, built primarily on melody, attitude, and sound. When those aren't present, it's easier to pay attention to the lyrics and rarely does that help the cause. It's not that Gallagher and Co. are being graded against the curve of Dylan, Waits, and Springsteen and come up short, it's that their words are at best forgettable and at times cringe-inducing.

Beady Eye is a new band that isn't and the three principles aren't young artists likely to grow much beyond where they are. There's nothing to embrace here for those who didn't love Oasis and even some of them will miss Noel's vital role at the center of the band's identity.  It's good for what it is and better than I feared it might be. This is probably the best this band can do, meaning we can expect good songs and flawed albums.