Another all-star tribute that falls short... 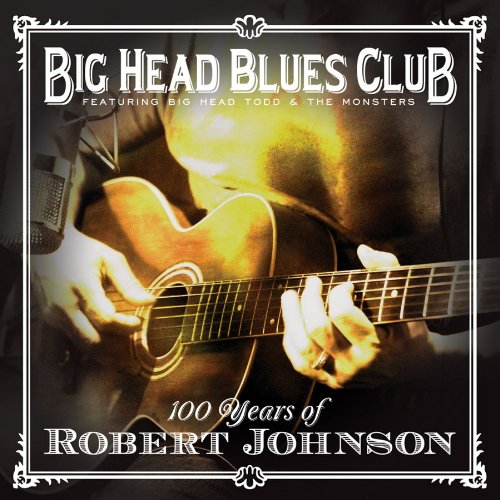 The icnonic Robert Johnson would have turned 100-years old this year and part of his influence and legend stems from the fact that he died long before that. 100 Years of Robert Johnson is another tribute to one of the most important recorded legacies in music history, this time brought to us by Big Head Blues Club.

The club features alternative-roots rockers Big Head Todd & The Monsters and a bevy of blues guests. They are supplemented by legends B.B. King, Honeyboy Edwards (himself a one-time traveling companion of Johnson), Hubert Sumlin, and Charlie Musselwhite as well as contemporary blues artists Ruthie Foster, Cedric Burnside, and Lightnin' Malcolm.

Covering Robert Johnson for blues fans is a lot like covering The Beatles for pop-rockers. It seems so simple and obvious that everyone does it without ever asking themselves if its necessary and it rarely turns out all that well in the end. The best and brightest have taken their shots at one or both of these artists and few attempts yielded anything worthy of the source.

I went into 100 Years of Robert Johnson with an open mind despite this track record. I'm not overly familiar with the work of Big Head Todd & The Monsters despite being of their approximate generation but I love the guests who were brought in to play these great songs with them so I made the purchase and hoped for the best.

My willingness to take that risk has been rewarded many times but 100 Years came up snake eyes. Todd Park Mohr (Big Head Todd) is the leader of the band and he is the fault line. He is either a limited vocalist or an unimaginative one because there is little variation in his tone or attack and he sings in that same register and approximate key throughout the album. It's repetitive if you like his style and sound. It's intolerable if you don't. Any guesses on which camp I'm in?

Lack of variety is a problem beyond just Park Mohr's vocals. There just aren't that many surprises in the playing, arrangements, or song selections. To that last point, Johnson only recorded approximately 29 compositions during his lifetime so options are limited but even so, this track list is predictable.

Blues fans know the source material inside and out and we've heard the 10 songs on 100 Years covered ad nauseum. Big Head Blues Club didn't have to -- nor should they have tried -- reinvent these songs but there has to be some spark of life, energy, and distinctiveness and that spark is lacking in duration and intensity.

Honeyboy Edwards, well into his 90s, doesn't have the same fire or precision in his voice or playing he once did but he and Charlie Musselwhite deliver a fine duet of the oft-played "Sweet Home Chicago." I give them a pass on doing this overplayed tune as it has been a part of Honey's repetoire for decades.

B.B. King's voice is a welcome change on "Cross Road Blues," a change that would have been more welcome if Park Mohr had taken the entire song off rather than divying up vocal duties on it. King doesn't rain fire on his single-string solos but his lead style is a welcome change from an abundance of slide work throughout the rest of the album.

Big Head Blues Club is just one more in a long tradition of superstar tribute projects that mean well but don't take flight. The best way to celebrate 100 Years Of Robert Johnson is still to go to the source.