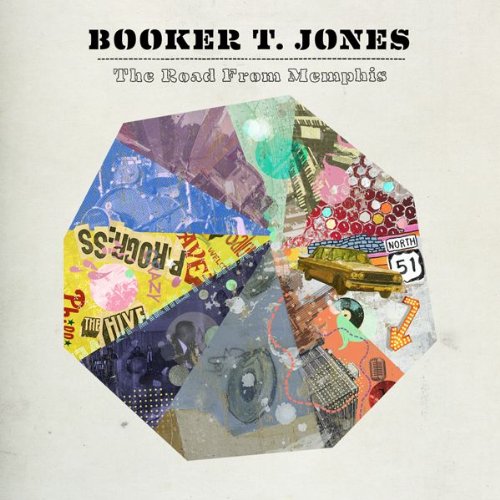 I get most of music from Amazon these days and when I looked up The Road From Memphis, I saw there were several bonus tracks available on the digital version. Can I please say right now this practice pisses me off to no end? The labels bitch and moan about how they can't make any money from downloads. What do they do? Give digital versions of records with slimmer profit margins exclusive content. The only people surprised those assholes are losing money are, well, them.

I looked at the bonus tracks and something immediately jumped out at me: Biz Markie had joined up with Booker T. for a remake of the Biz's fantastically daft hit "Just A Friend." You can't help but like that tune even though Biz is complete rubbish. This pairing alone was enough to make me want to download the bonus tracks once I'd bought the proper version of the album but that wasn't the only surprise. Joining Biz and Booker on the track was Sharon Jones -- a fantastic soul singer whose presence made perfect sense -- and Matt Berninger.

I am among the most fervent fans of The National and after initially struggling to wrap my head around Berninger's distinct voice I've come to quite like it. Despite that, I can't think of anyone LESS qualified to sing soul music. Hell, I might actually be more qualified than him and a song's been written about me called "Josh Done Stole The White Boy Crown" (true story, that). Matt Berninger singing soul music is crazy but nothing in this world is more fucked up than Matt Berninger sining "Just A Friend."

The cool thing is I've always liked "Just A Friend" but wouldn't be caught dead buying a Biz Markie record because I just wouldn't listen to anything else on it. He's crap. Booker T. and Berninger gave me the excuse I needed to get a song I wanted to own and the version here is every bit as fun and daft as the original.

Memphis has some perfectly wonderful moments and Jones still has a special way with his Hammond B-3 organ but anyone hoping for something as memorable -- or nearly as memorable -- as "Green Onions" is going to be out of luck. That's a hell of a high standard to hold an artist to and Jones isn't the first legend to spend a career trying to outdo his famous past. Special artists can effortlessly knock out something interesting and pleasant because it's in the genes, but the magic of genius is a tricky bitch and the finicky bugger shows up when it pleases and that's the rub here on Memphis.

The playing is strong, the music well crafted, and the sound appealing but with the exception of the cover of Gnarls Barkley's "Crazy," the hooks aren't memorable on any of the instrumental tracks. None of them are annoying but they are more odes to a style than actual compositions. By all means, listen to them and soak them in. They're all emenantly listenable even if they aren't quite memorable.

Booker T. takes a rare lead vocal on one track; other vocalists include Lou Reed, Yim Yames (My Morning Jacket), and Sharon Jones and Berninger duet on another. Yames' vocal on "Progress" is easily the best of these. Booker's voice is better than you might think for a guy who brings in so many guest vocalists and is known primarily as an instrumentalist and his "Down in Memphis" is quite good.

I mentioned earlier how much I love Berninger as a singer but his duet with Jones on "Representing Memphis" doesn't work. "Representing" has taken on something of a distinct meaning in the hip hop vernacular. I know that; Berninger apparently doesn't (hence my only half-joking belief I might be more qualified for a role like this and I'm an atrocious singer). He's so out of place he actually holds Sharon back, and that's a shame because she's got a wonderfully soulful voice. Reed's presence isn't quite as confusing as Berninger's in part because "The Bronx" is exactly the sort of thing you'd expect him to do making the singer fit in a way "Representing" made Berninger feel out of place.

The title might imply the legendary Booker T. wanted to express himself beyond the style and geography of the city he made his most memorable music but the best moments on The Road From Memphis provide all the evidence we need that home is where the heart is.