Brad Paisley is one hell of a guitar player, and this album proves it! 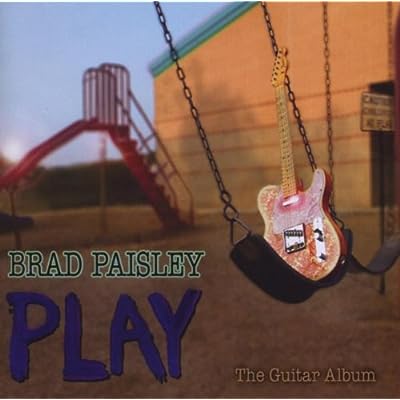 First off I'm not much of a country music fan, but I am a fan of great guitar playing and instrumentation. If you're like me and find yourself curious about country style guitar this is the album to get. The tone is polished yet raw, the performance subtle yet intricate, and there's no doubt this is a guitar masterpiece. The sound engineering is also impeccably balanced with plenty of nuances throughout the mix to be discovered upon repeated plays.

This album plays like a history lesson in guitar through country tinted glasses because Paisley covers and all the bases including rock with "Cliffs of Rock City" which sounds like Joe Satriani and Eric Johnson with a country twist. Blues is covered with the track "Playing with Fire" which is country take on Stevie Ray Vaughan. "Turf's Up" as you can probably imagine is a surf-like tune, "Les is More" is a jazzy number inspired by Les Paul, and "Let the Good Times Roll" is an old school blues romp 'n stomp where Paisley trades licks and vocals with B. B. King. The highlight of this history lesson is the track "Cluster Pluck" which is crazy country chicken pickin' in all its glory. It is a terrific jam featuring James Burton, Vince Gill, Albert Lee, John Jorgenson, Brent Mason, Redd Volkaert, and Steve Wariner. I'll admit that I don't know who these guys are, but they are great players too.

There is plenty of country fried Fender Tele rippin' throughout the album that showcases Paisley's chops, and you need to go no further than the opening track "Huckleberry Jam" to get an ear full. I'm impressed by his finger finesse, articulation, technique, and repertoire of riffs and licks. As a guitar player myself I understand how difficult it is to play fast complex passages with a clean tone because you can't hide behind delay and distortion. You're skills are completely exposed, and that is the appeal, at least for me, for this kind of playing.

The up-tempo tracks are complemented nicely by some down-tempo numbers highlighted by "Kim" which is rich with warm melodies. It's a great arrangement with a lot of beauty and soul. Then "What a Friend We Have in Jesus" is a pleasant solo acoustic track. I think the album could have benefitted from more acoustic tracks instead of some of the songs with vocals, but that may just be a personal preference.

I've seen Brad Paisley concerts on DVD which spurred my curiosity because it was evident that he could play and perform, but I haven't been able to get into Brad Paisley as a singer because the lyrics don't typically appeal to me. Regardless he is a master guitar player, and I recommend this album.