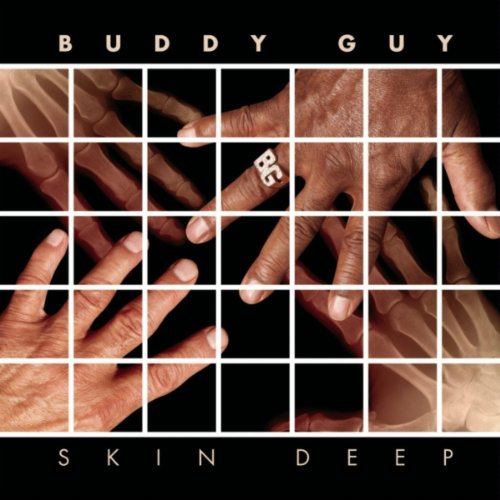 Buddy Guy has been around so long we seem to need constant reminders of not only how great he was but how great he still is. He delivered his comeback album Damn Right I've Got The Blues in 1991 and it was powerful enough to overcome more than a decade in relative obscurity.

He joined the Rolling Stones on a ferocious cover of Muddy Waters' "Champagne & Reefer" last year and took them back to school! Listen to the soundtrack of Martin Scorsese's Shine a Light or watch the film and you'll witness the timeless force of nature that is Buddy Guy reducing the Stones to rubble.

This year he returns with Skin Deep, his first since Bring 'Em In in 2005. Guy wrote or co-wrote seven of the 12 songs on the album and is joined by guests (Derek Trucks, Susan Tedeschi, Eric Clapton, and Robert Randolph) on five of them.

Opener "Best Damn Fool" is a rocker with a big, B.B. King-style arrangement adorned with glitzy horns. "BDF" is in the vein of Muddy Waters' "Got My Mojo Working," something he makes clear with a sweet homage near the song's end. "Lyin' Like a Dog" — seven minutes of Guy at his visceral best — and the title track are also bright spots.

Robert Randolph makes the most of his two guest appearances, trading some screaming solos with the legend. Guy is an open channel of the blues, and a direct current flows through him in every note he sings and plays. He could do a record in 3/4 waltz time and it would still be the blues. The album plays nicely and with one exception — the cringe-inducing "Show Me the Money" — is a pleasure to listen to.

The only downside to Skin Deep is one that has plagued his most recent albums. There are two things you'll quickly notice if you compare Skin Deep and, say, Left My Blues in San Francisco. The first is the difference between the recording technology of those two eras. These advances have made sound reproduction clearer and more accurate, but have led to a trend towards increasingly antiseptic records filled with pristine sounds.

The second crucial difference is the backing band. The reason Skin Deep doesn't sound like the classics he cut for Chess and Vanguard is because the guys who played on those records are different. You begin with Guy and start subtracting. His music misses great sidemen like Junior Wells, Lafayette Leake, Otis Spann, Fred Below, and Jack Meyers. The interplay between musicians and chemistry with the music isn't the same. Throughout Skin Deep, Guy sounds urgent, but slick production prevents these songs from detonating.

Recording technology has advanced and maybe the musicians have, too, but the sum of the parts isn't greater. Guy is still in strong voice and his fingers still make the guitar scream, slash, and burn, which is all the reason one needs to recommend Skin Deep.