A strong album with a few missteps... 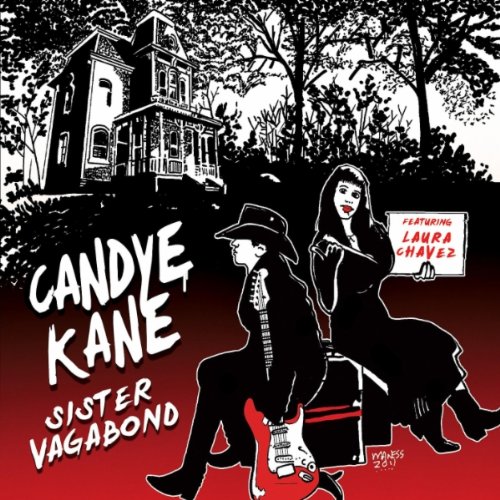 I don't know if it's fair to call Candye Kane a polarizing figure in the blues world but she has a larger-than-life presence that makes it difficult to remain neutral where she's concerned. I'm not sure how much her persona influences her fan base or detractors but it's hard to ignore. I came to Sister Vagabond knowing more about her than her music, my lone exposure to her music being her appearance at the 2010 Blues Music Awards.

Her previous album Superhero was at least partially inspired by her battle with cancer and helped her to several Blues Music Award nominations. Sister Vagabond is her Delta Groove Records followup, produced by band member and guitarist Laura Chavez.

Many blues fans have spoken highly of the guitar talents of Chavez and you can add me to the list of her admirers after listening to Vagabond. She has great tone and feel and her compact leads accent these songs quite well.

Sister Vagabond opens strong, the first four songs mining a more contemporary blues sound. Chavez's guitar is tart and snappy on "Love To Love You" and Kane is charming on the clever "Love Insurance." Chavez's guitar and the underlying rhythm give "Sweet Nothin's" a Bayou flavor and flows nicely into the Gothic-tinged "Walkin', Talkin' Haunted House." "You Can't Hurt Me Anymore" features a nice bit of overdubbed harmony from Kane and what might be Chavez's tightest solo on the set. Chavez really shines on "Hard Knock Gal," as well.

These tracks play it straight featuring solid construction, strong guitar work, and well-executed vocals. Sister Vagabond works best when it sticks to this formula. Kane and Chavez demonstrate they can have some fun and play it straight at the same time.

"You Never Cross My Mind," "Have A Nice Day," and "Side Dish" are departures from the sturdy, disciplined approach and I'm sure there are plenty of Kane's fans who'll point to these as their favorites. They feel a little too cute by half for me, coming off as novelty. Maybe they're not meant to be taken seriously; I considered that. It didn't matter. They still felt Vegas-meets-Vaudeville contrivances and don't gel with the rest of the record, which is stronger material anyway.

Sister Vagabond is a strong effort with a few missteps that can easily be overlooked for the moments that really click, moments where Kane and Chavez push and pull the best out of each other.